Last update, I was fighting through the post-op fog & struggling to re-familiarize myself with my current work-in-progress (a Harlequin Desire I’m calling A Baby in the Billionaire’s Boardroom, but I expect that to change) & get back to writing.  And it wasn’t going well. :houhoh

Agent Extraordinaire suggested I go back & not only re-read what I had written already, but re-type it, as well.  So I did that.  And it kinda-sorta worked.  It definitely helped to refresh my memory of the story & characters, so that was good.  But when it came to carrying on with the typing of new words & ideas…  Um, not so much.

No matter how in the flow I thought I was, how ready to jump back in, every time I tried, I drew a total blank.  Very frustrating.

So I started to wonder if what I needed was a change in my normal writing process.  Something to jumpstart me, shake things up.  Usually, I use my beloved AlphaSmart.  In fact, I’ve written every book since (& including) Walker’s Widow on it exclusively; that’s 19 full-length books & 4 novellas.  Wow.

My trusty Alphie Neo wasn’t working for me, though, so I decided to try something different.  What if I tried writing by hand?

Now, normally, I only write synopses by hand.  For some reason, they come out faster & better that way.  My brain seems to function well on the big picture when I’m scribbling with a pencil & paper.  But I’ve never written by hand before because it adds extra steps; instead of typing once on the AlphaSmart, then adding the text to my computer & being done with it, writing by hand means writing, then typing, then adding. :santa

But since nothing else was working, I figured I’d give it a shot & see what happened.

I started slowly, nervously, even.  I wasn’t entirely sure of what I was doing because I’d never done this before.  Even before I got an AlphaSmart, I wrote on a typewriter or the computer; I don’t think I’ve ever written anything substantial by hand.

Something kind of miraculous happened, though.  It worked!  The words started to come & the story started to flow again.  I was even—gasp!—kind of enjoying myself!

Another great thing was that ABCFamily Channel had just run a Harry Potter marathon, & I’d recorded them as a refresher.  (Sure, I’ve got them on DVD, but who can be bothered pulling those out? :cat )  So while I was working to recapture my creativity, I had some great, creative stuff playing in the background to entertain me. 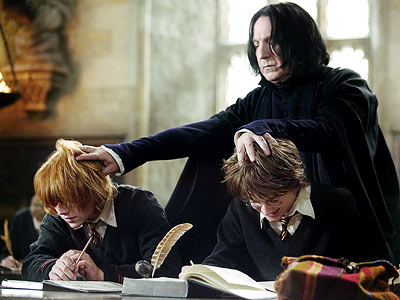 It was almost like magic…or like Professor Snape was standing over me with a menacing look until I started writing again!

I’m still writing this way, too.  Yes, it’s a little slow & I’m still dealing with that extra step of having to type up what I’ve scribbled by hand, but whatever works, right?

“Without that tablet, we’re nothing!”
(Night at the Museum: Battle of the Smithsonian)