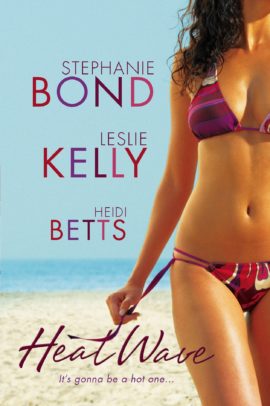 It’s gonna be a hot one…

Abby Weaver abandons the cool haven of her pharmaceutical basement for a girls-only week of sun, sand, and fruity drinks. That was the plan…until Abby finds herself going solo. But the beach is a funny place—you never know just what (or who!) will wash up onshore.

“'Shaken and Stirred' is a sultry romance that is the perfect ending to this fabulous anthology. Mike and Abby quickly had me absorbed and wanting more. From the first page to the last, Heidi Betts keeps the story moving so that I am unable to quit reading. 'Shaken and Stirred' is simply an awesome story!”~Joyfully Recommended by Joyfully Reviewed

"…witty and clever, the chemistry, explosive. Delightful from beginning to end, if "Shaken and Stirred" is any example, Heat Wave is one to put on your must buy list. Heidi Betts strikes again with another winner."~CataRomance Reviews

"More than a romp for the beach, this anthology features characters that have real lives—not just hot sex, although there is plenty of that. Bond, Kelly and Betts are all justifiably renowned for their sizzle, and it’s very much in evidence in these three extremely enjoyable stories." ~4 stars, Romantic Times

“Heat Wave is a blazingly hot summer read, where unforgettable moments and emotion abound. By combining a touching romance, heated passions and believable emotions, Heidi Betts delivers a captivating story to enchant readers. Her knack for creating likable characters is very noticeable in the personalities of Mike and Abby, whose sincerely realistic actions and thoughts make one care about them and their futures. And there is certainly an abundance of impassioned moments in this story, where desires lead to fervent situations. “Shaken and Stirred” is a rewarding read, filled with emotional intensity and deep longing plus a perfect touch of humor." ~4 1/2 stars, SingleTitles.com

“All together, these stories make for great beach reading! They are totally sexy stories with great romance. Heat Wave will definitely get you hot!” ~4 stars, Romance Readers Connection

Abby’s hands were as petite as the rest of her, with long, slim fingers and pretty nails painted a soft, glossy peach. And there was no wedding or engagement ring on her left hand, Mike was happy to note.

After letting go, she reached into the small cooler he’d carried across the sand for her and pulled out a bottle of Diet Coke with lemon.

Since she no longer seemed annoyed that he was sticking around, he wasn’t about to pass up the opportunity to stay and get to know her a little better.

“Sure, thanks.” He twisted the cap and took a long drink while she got one for herself and did the same.

“So what are you doing at the beach all by yourself?” he asked by way of making conversation and getting some much-needed information out of her.

Pulling the hat off her head, she ran a hand through her long, straight hair, then finally slipped the dark sunglasses off her nose to reveal those sparkling emerald eyes.

“I’m on vacation. A friend was supposed to come with me, but she had to stay and work on an important case. She’s going to fly down as soon as she can get away.”

“Where are you from?”

“Ohio. I’m a researcher for Galaxy Pharmaceuticals, and Rachel is a prosecuting attorney for the county where we live.”

Mike gave a low whistle. “Nice. Is your friend as attractive as you are?”

She coughed and nearly choked on a mouthful of Coke, her eyes going wide and damp as she struggled for air.

He leaned forward to pat her on the back, amused that she could be so easily flustered.

“Okay?” he asked once she was breathing normally again and her eyes no longer threatened to bug out of their sockets.

Hand at her throat, she nodded. Then she screwed the cap on her bottle of soda and set it aside.

“My friend is very attractive,” she told him, pointedly refusing to meet his gaze. “You’d like her. If you want, when she gets here, I can introduce you.”

It was his turn to almost choke. Could she really believe he was more interested in her faceless friend than the flesh and blood beauty sitting right in front of him?

“So what does she look like?” he asked, just out of curiosity.

Abby licked her lips, glancing anywhere but at him. “She’s tall, with a great figure. Brown eyes, long, wavy brown hair. She’s witty and confident, and men love her. Not that she dates a lot,” she added quickly in a bid to defend her friend’s reputation. “Her work keeps her busy.”

“And you think I’d be more attracted to her than I am to you,” Mike said, making it more of a statement than a question.

She shrugged one slim, bare, and adorably freckled shoulder, finally raising her gaze to his. The lack of light and energy in her eyes made his gut twist.

Then most men are idiots, he thought to himself. And the one thing he’d never been was an idiot.

“Good,” he said brightly, shifting an inch or two closer on the giant blanket. “I’m an excellent competitor, but the time I don’t have to waste beating other guys off with a stick is time I can spend getting to know you better.”