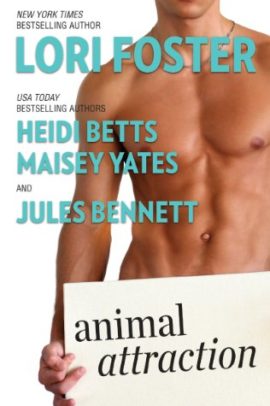 
in the ANIMAL ATTRACTION anthology

***All Author and Agent proceeds from sales of this book will benefit the Animal Adoption Foundation, a no-kill animal shelter in Hamilton, Ohio.***

When animal lover Erica Castillo's sexy neighbor shows up on her doorstep at midnight, in the pouring rain, with three tiny kittens cradled in his strong arms, she can't turn him away. But will Dean Maxwell's rescue efforts make him a temporary hero...or the forever kind?

"Gimme Shelter" is a sexy romance certain to please animal lovers. Erica is a devoted animal lover, and Dean, although not currently owned by any pets, is more than willing to step in and help an animal, or three, in need. It was a delight to watch them come together, while always mindful of their furry responsibilities." ~Kathy's Review Corner | Full Review

Animal Attraction is an awesome anthology by some of my favorite authors. Not only does it have great stories, it is also for a very worthy cause that makes every dollar you spend worth it." ~HarlequinJunkie Blog (5-star Amazon review)

Great stories with great meaning behind them, both romantically and with the animals that are in each and every one. Don't miss Animal Attraction by Lori Foster, Heidi Betts, Maisey Yates & Jules Bennett. I assure you won't regret it." ~reader Yazmin Rangel (5-star Amazon review)

Animal Attraction is a wonderful collection of romance stories writing around the love of our four-legged friends. Each story has a special connection to those pets that capture our hearts. As a bonus, proceeds from this book goes to a worth pet cause. You can't go wrong in getting this book." ~reader Judy/"book reader" (5-star Amazon review)

It was a dark and stormy night. The kind ball-of-nerves Murphy hated, but Erica Castillo loved because it was the perfect excuse to curl up on the sofa with a bowl of popcorn and a cup of hot tea to watch one of her favorite movies. Tonight, she thought it might be Morning Glory or The Ugly Truth.

Corn already popped and tea already steeped, she carried everything to the living room and slid a disc into the DVD player. While it went through random previews and got set up, she trailed through the condo, checking on her babies.

Not surprisingly, pint-size Lola was at her heel, prancing along behind like her shadow, nails clicking on the bare floor. Her three cats—Jasper, Rascal, and Sampson–were all curled up sleeping. Two on her bed, the other at the top of the cat tree in the living area near the sliding doors.

And finally, poor Murphy. She never knew where she would find the part-labrador, part-retriever, part-who-knew-what when he got scared, but it was always under the bed, under the desk, in the closet under a pile of shoes. Any tight, dark spot he could squeeze himself into. Tonight, he was in the bathroom, the only room without a window, huddled between the toilet and the bathtub.

Lola hurried ahead, giving Murphy a couple of reassuring licks on the nose and ear.

“Good girl,” Erica praised, patting Lola on the head before crouching down to pull Murphy close and scoop him into her arms. Which, at forty-plus pounds was no easy feat.

“It’s all right,” she said, hefting him up and hugging him close in an attempt to alleviate his shivering. “Just a little bit of rain and thunder. It will pass, and nothing is going to hurt you while I’m around.”

Not that her words had any effect. Erica suspected the poor thing had been tied out in all sorts of ungodly weather, day and night, by her previous owners. Something that—if Erica had her way—would be illegal.

Lola followed her back to the living room as she carried Murphy to the sofa. It took some minor acrobatics, but she finally managed to stretch out, cover herself with a light throw, and get Murphy tucked in front of her.

Patting the cushions near her legs, Lola jumped up and made herself comfortable, too. It made Erica feel like a human burrito, but if the kiddos were happy, she was happy. And Murphy’s shaking was already beginning to subside.

Halfway through the movie, the storm had died down, Murphy had relaxed, and Erica had eaten her popcorn down to the kernels—with a bit of help from her canine companions, of course. Erica was even getting a little sleepy, and wondered if she’d make it through the entire film.

She was just hiding another yawn and thinking she might spend the night on the couch instead of dragging herself to bed when a heavy knock sounded at the front door. At first, she thought it was another clap of thunder, and both she and Murphy jerked. But then she realized that, even though it was almost midnight, she had an uninvited visitor.

Of course, at this time of night, it could turn out to be an axe murderer or sex criminal or something.

Thankfully, though Murphy was jumpy about storms and loud noises, he loved people. Company was his favorite thing, and a knock on the door was as exciting as a newly opened bag of Snausages for him.

Earlier fears forgotten, he leapt from the sofa and raced to the door, tongue lolling and tail wagging.

Lola, however, waited for Erica to extricate her legs from the blanket and pick her up to carry her to the door. Ever the aspiring pocket pup.

Erica wasn’t sure what to expect when she peered through the peep hole. It was a little late for Jehovah’s Witnesses, but the possibility of a psychotic killer didn’t appeal, either. A dozen gory scream queen scenes flashed through her mind, and that was without having watched a horror flick for the past hour.

What she found on the other side of the door was a bit heart-stopping, though. A man—dark hair, dark jacket, soaking wet with water still dripping down his face, and clutching…something to his chest.

She didn’t see an axe, but a knife, a gun, a rope were still possibilities.

Stop it, she chastised herself. This wasn’t a game of Clue. And with any luck, it wouldn’t turn into an episode of Texas Chainsaw Massacre, either.

Clearing her throat, she raised her voice to be heard through the door and the still-falling rain, “Yes?”

Buh-dump. Her heart gave a lurch.

Dean from next door was a hunk. They barely spoke, mostly waved to each other in passing, but she saw enough of him to know that he was tall, broad-shouldered, well-muscled, and filled out a pair of jeans like nobody’s business…and every woman’s dream. His dark brown hair was cropped short, and he was fond t-shirts, long-sleeve flannels over the t-shirts, and a faded, well-worn denim jacket.

She thought he might also be a mechanic or something, but wasn’t sure. He tooled around with his truck sometimes on the weekends, but otherwise, tended to leave early, come home late, and keep to himself.

Not that she paid all that much attention.

Now here he was, at her door at the stroke of midnight, in the middle of a giant thunderstorm. She probably should have been more wary about letting him in, but was just plain curious. Besides, if he tried anything untoward, she could always sic Lola on him. The little chihuahua would nip at his heels and make it impossible for him to ever wear those pants again.

Flipping on the overhead porch light, she slid the chain from its latch and twisted the deadbolt, opening the door to let Dean in. He didn’t waste a second, pushing inside and slamming the door behind him with the heel of his boot.

Erica took a step back, momentarily nervous, even as Murphy danced around, sniffing and trying to get this new person’s attention. Neighbor or no neighbor, what if he was up to no good?

But then she noticed his expression—a mix of confusion and near-panic. He closed the distance between them, thrusting the balled up towel in his arms toward her.

The corner flipped back to reveal three tiny balls of wet fur huddled together, and Dean’s green eyes widened as they met hers.