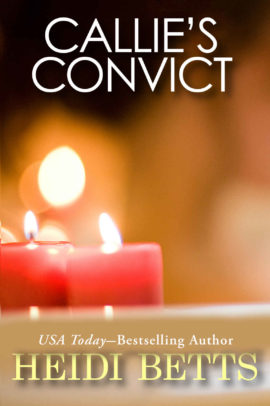 
Between Heaven and Hell lies Purgatory, Texas–a town with too few saints…and too many sinners.

Wade Mason had been to Hell — and escaped. Shackled in iron manacles, the fleeing inmate traveled to Purgatory to claim his newborn son. He arrived at Callie Quinn’s house ready to do battle. But the beautiful angel who guarded his child stripped him defenseless by plopping the crying bundle of joy straight into his unsuspecting arms. They just as surely as she’d released him from his chains, Callie freed his heart. And Wade knew he’d found Heaven in her embrace.

When the intimidating outlaw showed up on her doorstep, Callie vowed she would fight tooth and nail to protect the infant entrusted to her. After all, what did a hardened felon know about babies? But one heated kiss told Callie that Wade understood all about tender care. And soon she realized he might be the convict, but she was prisoner to his touch, to his desires … to his love.

"For a good story and unforgettable characters, you can't beat Heidi Betts!" ~Maggie Osborne, bestselling author of I Do, I Do, I Do

"This book drew me into the story on the first page. I read the entire book within one day. It is THAT good! The author made the feelings of both main characters clear when it came to the baby. I could actually FEEL the pain of each when they thought about losing custody of the baby to the other. Heidi Betts's writing talent burns as brightly as the sun! Highly recommended!" ~Huntress Reviews

It occurred to Wade that Callie Quinn was technically his hostage. He shouldn’t be letting her just wander around on her own without him keeping an eye on her. Then again, she hadn’t tried to run when he’d first broken into her house, and she seemed pretty determined to stay with Matthew. He hadn’t expected her to feed him, or find an extra set of clothes for him to wear, or — lord have mercy — help him get free of his grimy garments so he could bathe.That had surprised him most of all, and he’d been damn glad she’d turned around before he’d gone to work at removing his pants. No sense scaring her any more than he already had, but it had been a hell of a long time since he’d been with a woman, and if the sight of her initial nakedness hadn’t stirred something in him, the way she’d looked at his bare-but-dirt-covered chest sure as blue blazes would have.Even the now tepid water swirling around his lower body didn’t help to extinguish the heat pooling in his groin. He hoped whatever trousers she managed to round up were a couple of sizes too big or he’d send her screaming by dawn.

Wade dragged the bar of soap over his skin until it felt almost raw and turned what he considered a healthy shade of pink. Incarceration wasn’t exactly the best situation for proper hygiene, and he damn well missed it. He dunked his head and took to scouring his scalp just as roughly.

By the time he finished … and he wasn’t sure he’d ever be truly finished … Callie’s previously clear and fragrant bath water was a disgusting shade of brown and smelled like a pig trough. But at least he no longer looked or smelled that bad. He hoped.

Grabbing the single towel from the floor where he’d spread it earlier for Callie, he stood and began drying his upper body as best he could. Then he threw the towel back to the floor and stepped out, careful not to let the damn shackles clasped painfully to his ankles trip him up. Of course, now that he’d made sure to protect Callie’s nice, clean hardwood floor, he had no idea how he was supposed to dry his lower extremities.

From around the corner, Callie’s bright, sing-song voice reached his ears before the sound of her footsteps did. “I brought you an extra towel, and I don’t think you’ll have a problem fitting into Nathan’s things. He’s fairly big, and you’re …”

Her words trailed off as she stepped into the room, raised her head, and saw him standing bare-ass naked in the middle of the room.

But at least he wasn’t dripping on her hardwood floor.

Mouth falling open, her wide-eyed stare went directly to that part of him that hadn’t been subdued by the coolness of the bath water or any other remedy Wade had tried.

“Freezing my balls off,” he said brusquely, in hopes of breaking the tension and keeping his mind off the fact that she was looking at him there. Or worse yet, that he liked it. He’d been in prison too damn long, and his choice of language in front of a lady wasn’t the only proof of that fact.

“Mind handing me that towel so I can dry off?” he prompted.

She staggered the two steps forward that brought her close enough for him to grab the towel himself. He shook it out and wrapped it around his waist, then happened to notice the object on top of the neatly folded shirt and jeans lying across her upturned palms. It made him just the teeniest bit nervous.

He glanced at her face, noticing that her gaze was still slanted downward at what the second towel now covered. His eyes went back to the top of the pile resting on her upturned hands. Then again to the direction of her stare. Clearing his throat, he tried not to sound worried.

“Just what were you planning to do with that hacksaw, sweetheart?”