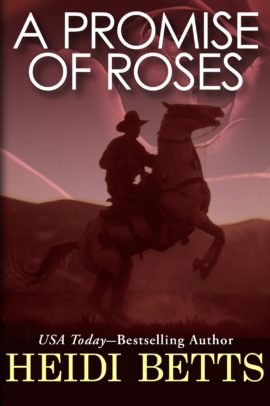 Spunky Megan Adams would do almost anything to save her struggling stagecoach line — even confront the bandits constantly ambushing the stage for the payrolls it delivered. But what Megan wouldn’t do was fall headlong for the heartbreakingly handsome outlaw who robbed the coach, kidnapped her from his ornery amigos, and dragged her halfway across Kansas — to turn her in as an accomplice to the holdup!

Bounty hunter Lucas McCain would stop at nothing to get his man. Hired to investigate the pilfered payrolls, he was sure Megan herself was masterminding the heists. And he’d be damned if he’d let this gun-toting spitfire keep him from completing his mission — even if he had to hog-tie her to his horse, promise her roses ... and hijack her heart!

“Romance author Heidi Betts proves herself a fine writer once again with her second historical, A Promise of Roses. Fans can eagerly anticipate a terrific western rich in adventure and passion when a spunky stage coach line owner clashes wills with a bold bounty hunter. Read this winning romance and watch the sparks fly!” ~Patricia Rouse, Romantic Times

“A Promise of Roses delivers an earthy, tantalizing blend of humor and poignancy that is not to be missed!” ~Connie Brockway, USA Today bestselling author of The Reckless One

We got trouble,” Zeke said, lifting his shotgun.Megan didn’t have to turn her head. She could see riders closing in on them from all directions, surrounding the Concord. Slapping the reins, she drove the horses faster, hoping to outrun the men closing in on her.

“It’s no use, Miss Adams,” Zeke called over the noise of the rattling stage. “I’ve been through this before. They’ll get you no matter what you do.” He got off a shot but they were moving so fast it was bound to miss its mark.

Megan didn’t say anything but urged the team to dangerous speeds. The outlaws raced beside and behind the stage. One reached out and tried to halt the horses, to no avail. A shot rang out and the lead mare dropped to the ground, pummeled and dragged by the others until they had no choice but to stop.

As she tugged on the reins to stop the heavy vehicle, Megan yelled for the passengers to stay inside the coach no matter what. She couldn’t stop the bandits from halting her stage, she may not even be able to keep them from taking the railroad payroll, but she for damn sure wasn’t going to let them hurt her customers.

“Nice to see you again, mister.” The man who spoke to Zeke seemed to be the leader. His mount pranced nervously at the scent of blood from the lead mare. “Mind throwing down your weapon?”

Zeke did as he asked without argument.

“You killed my horse, you bastards!” Tired of letting the bandits have the upper hand, Megan reached for her gun. Before she could aim it at any particular target, the pistol flew from her grasp and a sharp stinging vibration ran through her fingers.

Damned if one of the bastards didn’t shoot it right out of her hand! She raised her eyes and glared with icy disdain at the bandit guilty of disarming her. A thin trail of smoke floated up from the barrel of his Colt revolver.

“Must be a new driver,” the leader called back. “He thought he could get the drop on us. Nice shot, Luke.”

The man named Luke remained silent. Even with a brown bandanna hiding the lower part of his face, Megan could see cold disinterest in his blue eyes. He leaned forward in the saddle, an arm lazily draped across the pommel. It seemed to annoy him that he’d even had to remove the Peacemaker from its holster.

Megan stared at him long and hard, memorizing every detail from his pale eyebrows to his scuffed boots. She may not be able to identify all the members of the outlaw band, but she was going to make damn certain she could pick this particular man out of a crowd.

“Throw down the box,” the leader commanded.

“Over my dead body,” Megan spat.

The leader shrugged. “Don’t like to hurt anybody if I can help it, but since you seem so determined, I’d be happy to oblige.” He raised his gun and aimed it at Megan’s heart.

“Just throw down the damn box!” the man named Luke called out.

His voice sounded tense and Megan wondered why he should care whether she was killed or not. She stood and pushed Zeke across the seat into her spot. With a clear view of the leader, she put her hands on her hips and lifted her chin a notch. “Over my dead body,” she said again.

“Christ, this one’s a real pain in the ass.” The leader cocked the hammer of his pistol and pulled the trigger.

Megan held her breath and waited for the searing pain to rip through her body. After a second, she realized the bullet hadn’t hit her. He had only shot her hat off.

Lucas cursed under his breath when the shot rang out. He thought for sure Evan planned to kill the boy, or at least make him wish he were dead.

When a veil of midnight hair fell around the driver’s shoulders, Lucas lost his train of thought. The hot July sun brought out streaks of auburn in the waist-length mass and her brown eyes shone with angry defiance. Dammit, the chit had more brass than brains. Didn’t she know better than to hassle a gang of gunmen?