What do you say to a nice, juicy excerpt today to whet your appetites for SECRETS, LIES & LULLABIES?  (Which will be available October 30th.  Only three more weeks from today, people! :dancebat ) 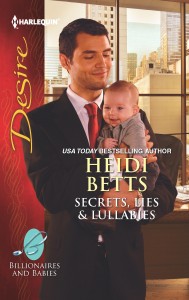 “Why are you doing this?” she asked softly. Shifting Henry from one arm to the other, she turned to face Alex more fully. “You don’t even know for sure that Henry is yours.”

She did, of course, but she’d assumed that was the point of the paternity tests they’d taken that afternoon.

A very simple, off-the-cuff answer, but she suspected there was more to it than that.

“You’re going to make us stay, aren’t you?” she asked barely above a whisper.

“For the time being,” he said without hesitation.

Then, surprising her yet again, he reached out and slid his hands beneath Henry’s arms, lifting him out of her grasp and into his own.

For a split second, Jessica held her breath and nearly tried to tug the baby back. She had to remind herself that Alex was Henry’s father. He did have a right to hold him, if he wanted to.

As distant as he’d been up to now, he didn’t seem the least bit nervous about it. There was no hesitation, no pause while he considered the best way to position Henry against his thousand-dollar suit.

He was a natural. Either that, or he’d learned on the job during last night’s screaming fit. Still, she couldn’t resist stretching out a hand to smooth the baby’s shirt down his back, making certain everything was just right and he was okay.

It was odd not holding her own baby, not having him almost surgically attached to her side when she was the only person who’d held him for any length of time since he was born. She didn’t know what to do with her arms.

Letting them drop to her sides, she dug her hands into the front pockets of her jeans and told herself to leave them there, even though the urge was to fidget like crazy.

As hard as it was to admit, she made herself mumble, “You’re really good at that.”

“I’ve been watching you,” he said, his gaze meeting and locking with hers. “I figured I should probably get the hang of it if I’m going to be responsible for this little guy from now on.”

There it was again, the hint of a threat—or maybe just a reminder—that if Henry was his, Alex intended to exercise his full parental rights.

On the one hand, Jessica was impressed and sort of proud of him for that. A lot of men wouldn’t have been the least bit pleased to discover they might have a child they hadn’t known anything about.

On the other, she was scared almost spitless at what it might mean for her and Henry. What if Alex tried to take her son away from her? What if he wanted to keep Henry here with him, under his roof, but informed Jessica she was no longer welcome?

Jessica would fight—of course she would. But she already knew her chances were slim to none of winning any kind of battle against a man like Alex, let alone a custody one. Not given his money and influence and her total lack of either.

But being here, disclosing Henry’s existence to Alex, changed everything. It turned everything upside down and shook it like a snow globe.

To make matters worse, Jessica was afraid Henry was already showing signs of being a Daddy’s Boy. He was leaning into Alex, completely trusting, completely content. One of his tiny hands was wrapped around Alex’s silk tie, likely wrinkling it beyond repair, while his cheek rested on Alex’s shoulder, his bow of a mouth working around his pacifier, his fine, light brown lashes fluttering toward sleep.

“He missed his afternoon nap because of the interviews. We should probably give him a bottle and put him down for a while. If we don’t, he’s likely to get extremely cranky and keep us both up half the night.”

There was a twinkle of amusement in Alex’s blue eyes. One Jessica couldn’t help but respond to with a small smile of her own.

Alex nodded. “Why don’t you go downstairs for a bottle. I’ll stay here with him. While you’re down there, tell Mrs. Sheppard we’ll be ready for dinner in thirty minutes. You’ll join me, I hope.”

That caught her off-guard. “You’re giving me a choice?”

“Would that choice happen to be eat a four-course meal downstairs with you or enjoy a lovely serving of bread and water alone in my room?”

He chuckled. “My home isn’t a prison, and you’re not a prisoner.”

“Are you sure?” It was a pointed question, one that had her holding her breath while she waited for the answer.

“After the way you’ve been living, I’d think staying here would almost be a vacation. Why don’t you just enjoy it.”

As responses went, it wasn’t exactly a You’re free to leave any time you like. Although he did have a point; staying in this beautiful mansion was a far cry from worrying about where she was going to sleep that night or where her next meal might come from.

And yet she felt just as trapped as she would if he put her in her room and turned the key in the lock on the way out.

When all else fails, throw out a guilt bomb, she thought. And it hit its mark dead-center. How could she possibly deny him time with his newly discovered son? Besides, it wasn’t as though staying in a million-dollar house on a multi-million-dollar estate was going to be a hardship. Not physically, anyway.

Mentally, there was no telling yet what the toll would be. But she owed him at least this much.

Tipping her head, she kept her thoughts to herself, but let him know he’d won her over by saying, “I guess I’ll go down for his bottle then, and tell Mrs. Sheppard we’re

She patted Henry’s tiny back, then stepped around them and headed for the door. Just as she reached it, his voice stopped her.

“You can request bread and water, if your heart is set on it.”

Her lips pursed as she fought a grin, but his chuckle of amusement followed her halfway down the hall.

What do you think?  Are you loving Alex & Jessica as much as I do yet? :yummy