So here’s a little secret most authors don’t talk about—I’m currently flying with out a net.  Out of work.  No longer under contract.

The last book I turned in was the last book I was contractually obligated to write.  And while I’m rather enjoying the sensation of not being under deadline for a change, it’s never smart to wait too long before going after that next sale.  The distance between actively published & unpublished, employed & unemployed is entirely to short & precarious in this business, sad to say. :nowait 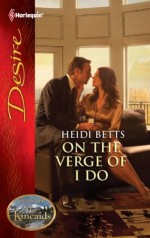 Luckily, I had a lovely conversation with Editor C yesterday.  After the delightful turn of events that put ON THE VERGE OF I DO on the USA Today bestseller list, they definitely want to see more Harlequin Desires from me.  And I got the feeling “the sooner, the better” was being strongly implied. :adevil2

We batted around a few ideas for what my next USA Today bestselling book should be  :howyoudoin & I’m especially keen on doing some connected books.  My very own author-driven mini-series (think Maureen Child’s “Kings of California” as opposed to an editor-driven, multi-author continuity such as “Dynasties: The Kincaids”), which I’ve never done before with my Desires.  Oh, I’ve done a couple of loosely connected books, but nothing that got its own this-is-part-of-a-series flash on the cover.  And I think I want a this-is-part-of-a-series flash on my cover. :happysun

And while I may not be the fastest writer in the world, I can be a pretty fast thinker.  Once my brain starts rolling in the right direction, I can come up with a story idea fairly quickly.

So here’s something I came up with (& really kind of like—not that I’m biased or anything :patrick ) & just sent off to Editor C.  I’m eager to hear what he thinks, but am curious about what you guys think, too.

Zoe, Lily, and Juliet Zaccaro are three sisters taking the fashion world by storm in this trilogy of passionate, provocative Harlequin Desires by Heidi Betts, set in the high-powered, high-price world of haute couture.

Her older sisters might think she’s crazy, but Zoe Zaccaro knows something’s rotten in Denmark. There’s no other way a rival fashion house can be scooping her designs before they hit the runway. So without a word to her family, she sneaks off and lands a job as the personal assistant to the CEO of the competing company.

Zoe never expected her new boss to be quite so charming or attractive, though—or that she’d have to spend quite so much time alone with him in very close quarters. And falling for him definitely hadn’t been part of her plan.

After hiring the best of the best private investigator to track down her missing youngest sister, Juliet Zaccaro finds herself engaged to one man, but pregnant to another. And there’s no way she can walk down the aisle carrying a child that doesn’t belong to her groom.

Needing time to think, to figure out what to do, Juliet follows in her younger sister’s footsteps and takes off without a word. But it’s hard to get lost when the best of the best private investigators is on your trail, and when this time, his mission is personal.

Wealthy, bubbly middle sister Lily Zaccaro is known for two things—her Dazzle line of fabulous designer footwear and partying until the sun goes down. She goes through men like allergy sufferers go through tissues. But there’s only one man who’s ever truly captured her heart.

When Lily find out her high school sweetheart is engaged to be married, she knows she can’t let him go through with it. Not until they’ve had a chance to put the past to rest. But since she’s pretty sure he won’t talk to her willingly, she may have to resort to a little something called kidnapping.

I’ve got to admit, I’m a big fan of all those fashion reality shows on TV, like Project Runway (where do you think I got the title ideas?), The Fashion Show, & Fashion Star.  So I think it would be a blast to write some Harlequin Desires revolving around that kind of setting.  I can also see some seriously sexy covers on these books, with heroines blinged out in some seriously sexy dresses & accessories. :eeee

What do you think Editor C will say about that idea, hm? :scratchhead