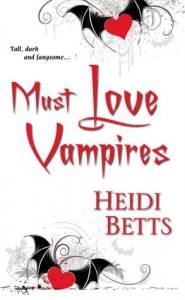 For those of you who haven’t picked up a copy of MUST LOVE VAMPIRES yet, how about a little sneak peek of what’s waiting for you behind the gorgeous new cover… :mask

Chuck came to herself in a blink. Literally.

It was the oddest thing. One minute she was asleep—she thought—and the next she was wide awake, sitting straight up in bed.

Not her bed, though. She glanced around, realizing she was not just in the bedroom of Sebastian Raines’s phenomenal penthouse, but taking up space on his personal mattress.

She did not remember that. Going through his wine rack and beginning to snoop in his closet, yes. But climbing into his bed . . .  Who was she, Goldilocks?

No, she definitely didn’t remember getting into–or onto, as the case may be—his bed.

Looking down, she noticed she had somehow gotten out of Chloe’s “Flames of Hell” costume and into . . . Oh, no. They couldn’t be . . . Sebastian Raines’s pajamas? Half of them, anyway—the bottom half—and a plain white undershirt.

Didn’t a woman usually get undressed, have (hopefully) mind-blowing sex, then jump into a man’s clothes? She had no recollection of any of those things. And if she’d been lucky enough to have mind-blowing, twisty stix pretzel sex, she really wanted to remember it.

In her peripheral vision, she noticed a form and turned her head to discover that she wasn’t alone in the room. A man—Sebastian Raines himself, she assumed—was standing with his back to her, staring out the window at the bright city lights playing against the still-dark night sky.

His black hair and the midnight blue of his tailored suit melded with the shadows hanging all around him, making him nearly invisible. It was only the paler hue of his hands clasped behind his back and his face in profile that had caught her attention at all.

She must have made a noise . . . or perhaps he heard the slight inhalation of her surprised breath when she noticed him standing there . . . because his arms fell to his sides and he turned in her direction.

The oxygen she’d sucked into her lungs just a moment before got stuck there at the sharp lines of his features and the intensity in his silver-gray eyes. She honestly couldn’t tell if he was angry, or if the stony expression was normal for him, but she was pretty sure she would never want to cross him, just in case.

His lashes fluttered slightly as he closed his eyes for the briefest second before opening them again and fixing her with a steady, determined gaze.

“What makes you think I’m a vampire?” he asked in a low, graveled voice. Without warning, without preamble.

Chuck gasped, more shocked than if he’d thrown a bucket of ice water over her head. How did he know she thought that? How had he found out?

Was that why she was here, in his apartment? Had he somehow discovered she was following him and dragged her up here to torture her for information, to find out how much she knew, and then either drain her dry before killing her outright or turn her into one of the walking undead?

In her best imitation of a crab, she scurried backward on the mattress until she hit pillows and the immovable bulk of the bed’s headboard. As though moving ten inches farther away and curling herself into a ball was going to keep Nosferatu from eating her for dinner.

“Yes, you do.” He stated it matter-of-factly, but remained exactly where he was. No going all Bela Lugosi on her or swooping in like a vampire (snork) bat, fangs bared. “You talk in your sleep.”

Okay, she totally didn’t think that was true. Of course, since she’d been sleeping alone much longer than she cared to admit, she couldn’t exactly call any witnesses to the contrary.

But while they were on the subject, how the heck had she gotten to sleep in the first place? She didn’t remember lying down, feeling drowsy, deciding to take a nice, restoring nap in a complete stranger’s—not to mention her unsuspecting (or maybe very suspecting, given the circumstances she currently found herself in) quarry’s—penthouse.

Much like when she’d first woken up in the living room earlier—and how much earlier, she had no clue—her memory was horribly sketchy. Unless it was some strange dream, she thought she remembered standing in the doorway of his closet, then having him come up behind her, scaring her half to death. There had been some screaming, and his hand over her mouth . . . and then a small confrontation in the kitchen over all of the opened, half-drunk bottles of wine she’d left there.

Maybe. And nothing after that.

It was completely bizarre for her to suddenly be having these horrible gaps in her memory. Now she knew how Swiss cheese felt.

A sudden thought popped into her head, making her gasp in alarm. And not because she was about to be nibbled on by some demon of lore, either.

Oh, God! This was how brain tumors were diagnosed. Loss of memory. Gaps of missing time. Blackouts followed by awakenings in odd places without viable explanation. She didn’t smell toast, but that symptom could be next.

“If you were a vampire,” she suddenly blurted, “and someone was dying of an incurable disease, could you change them?”

It was his turn to be caught off guard, she guessed, judging by the lift of one dark brow.

Folding his arms across his broad chest, he rolled back on his heels, studying her. “Why do you ask?”

She struggled not to choke on her own emotions, not to let the tears pricking behind her eyes spill over. “Because I think I’m dying. I think I’ve got a brain tumor, and it’s getting bad fast. I can’t remember anything. I don’t know how I got here or how long I’ve been here or how I got into these clothes.”

She plucked at the white cotton shirt that hung off one shoulder and billowed around her like a toga sheet. Oh! And it clearly showed her dark areolas and stiff nipples.

Gack, how embarrassing! She quickly folded her arms over her breasts, hiding them as best she could. But there was no doubt Sebastian had already seen them. How could he not, even without super-duper vampire vision?

He rolled his eyes at her, but not before she noticed his gaze flicking over her barely hidden upper assets.

“You don’t have a brain tumor,” he told her in a near-scoff.

She gave him a cross look before snapping, “How do you know? Are you a doctor, as well as a wealthy casino owner and clandestine blood sucker?”

Chuck waited for him to elaborate, but he didn’t. And even though she could feel the

tumor growing exponentially inside her head with every second that ticked by, some of her brain cells were still in tip-top shape.

When he didn’t respond to that accusation, either, simply continued to stand there, staring at her with those strangely eerie shadow-gray eyes, she knew she was right.

“I knew it!” she crowed, hopping up on her knees and bouncing like a schoolgirl at a sleepover. “I knew it. I was right.”

And then sensibility returned, and she realized where she was . . . and what her sudden knowledge could mean to her dubious future.

Falling back on her heels, she went still. “Are you going to kill me now that I know?” she asked in a low voice. It didn’t waver, which was nice, even though inside she had begun to shake.

One corner of his mouth lifted in momentary amusement. “No, I’m not going to kill you.”

He stepped toward her, his face once again a flat, unreadable mask. To her credit, she stayed where she was instead of doing the first-girl-to-trip-and-die horror movie shriek and scuttling to the other side of the bed.

But she watched him. Watched his sleek, muscular frame flow like water beneath the immaculate cut of his silken, almost metallic suit. His dark hair was perfectly styled, and his skin was light, but not too light. It was clear he didn’t spend much time out in the hot Las Vegas sun, but he wasn’t as pale as parchment paper, either.

Stopping just beside the bed, he let his long fingers trail along the edge of the navy spread, his attention focused with odd intent on the pattern of stitching he found there.

“First, I’d like to know why you suspect me of being a vampire,” he said, “and then I’m going to do something I’ve never done before.”

At that, he lifted his head, meeting her gaze head-on. Her stomach lurched and butterflies took flight. But not because she was nervous or he scared her. She was very much afraid the sensations swamping her were due to . . . sexual attraction.

No surprise there, not really. Even if Sebastian was a member of the blood-chugging elite, he also happened to be extremely hawt. Tall, dark, and handsome with a capitol T, D, and H.

She licked her lips, doing her best to stifle the unexpected and long-absent yearning prickling beneath her skin. “What’s that?” she asked, although she was almost afraid to know.

“I’m going to tell you everything.”