So last week, I started telling you about my trip to Best Buy to play with e-readers.  But after getting all excited about picking out an iPad, they didn’t have the one I wanted in stock. :patrick2   And I was standing there thinking, “Dammit! I came all the way over here, have spent four hours trying to figure out what to do, & now that I’ve made up my mind, I’m screwed.” :evilmonkey

Then I happened to turn around & see this table with random stuff spread out & around.  “What are these?” I asked.  “Oh, those are Open Items.”  Basically a clearance table of things that had been returned, but checked out & were still in perfect working order.  (Or so they claimed.)

And there was the exact iPad I wanted—in white!  And a Magic Touchpad I’d become somewhat enamored of while playing with the computers.  And a big, gigantic iMac.

Should I do it? I wondered.  Should I take a chance? :scratchhead   They swore the items were as good as new & the discounts were substantial.  The discount on the iPad alone pretty much paid for the Magic Touchpad, & the iMac came with the wireless keyboard they’d tried to talk me into buying to use with the iPad.  I have to admit, I was enamored.  And kind of excited.  But crazy-ass gullible, too, I know.

I had to take another look at the Macs, though, & play around to be sure I really wanted to take that dive from the World of Windows to Apple-mania.  I mean, it was a huge investment & also a giant leap from the type of computer I’m used to to something I’ve never seen before in my life.

That’s when I was very nearly swarmed by Best Buy guys who noticed that I’d brought up my own website & blog while I was kind of test driving the Magic Touchpad & wireless mouth with Safari & such.  They got such a kick out of seeing my books & the WIPs and Chains gals.  Yes, I got some good-natured ribbing, but mostly they wanted to see our “Sexy Fail Saturday” posts & my Bio.  The Bio cracked them up, & they all wanted me to write them into my next book.  I promised to try if they promised to use my website as their go-to in-store sample from now on.  They had been using CNN.com or YouTube, but I told them they had to bring up my site instead & tell everyone I’m a local author who bought all her Apple products right there at that store. :howyoudoin

So I did it.  Gullible or not, all day sucker or not, I jumped feet first into Apple World…which I still to this day know almost nothing about. :nowait 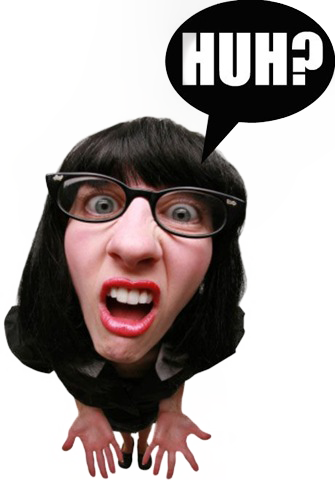 I was having so much fun playing with the iPad in the store, but as soon as I got it home & turned it on, I was completely clueless.  They’d showed me how to hook up to the wi-fi & I could see my connection on the list, but no matter how hard I tried, I couldn’t get it to work.  And basically, without internet connection, it was just a big, flat metal box, y’know?

I had no idea what to do about that or what else I could do until that had been solved, so I did the only thing I could think of—I gave up.  Put the iPad back in its box & set it on the floor near my old PC.  Because—yeah—I wasn’t going to bother setting up the Mac anytime soon, either. :slamdesk

Thankfully, I have a great friend from high school whose husband happens to be a Mac genius.  She saw my original post on Facebook about thinking about taking the e-reader plunge & said that if I ended up getting an iPad, she’d be happy to help me learn to use it.  Well, she had no idea what she was getting into, I’m sure.  Because next thing she knew, I was all, “Micheeeeeeeellllllleeeee!!!!  HELP!!!!!!  I bought all this new Apple crap & don’t know how to do anything but plug it in!”  (Yes, I actually figured out how to plug stuff in all my myself. :cool )

She talked me through a bunch of stuff through e-mail first…like having to buy & install a new router.  That, it turns out, is the reason the iPad wasn’t making a wi-fi connection—my current router was too old & not set up for handing brand new iPad technology.  :bubble   Then later, she got me hooked up with instant messaging & iChat, which turned out to be awesome.  The two of them talked me through even more, but best of all, he logged onto the Mac remotely & set up a ton of stuff I never, ever in a million, zillion years ever would have figured out on my own.  I owe them big-time—thank you, thank you, thank you, thank you, Michelle & Rob!

There were, have been, & will probably continue to be a few bumps in the road, of course.  For instance, no one at Best Buy told me that I’d have to buy Apps twice & at often at two different prices if I wanted them on both the iPad & Mac.  They totally had me believing that once I bought an App, it would sync over to the other system.

They also failed to mention that the Mac didn’t come with the three free Apps that are supposed to be included on pretty much every new Apple system.  Now, I may have been able to live without iPhoto & iMovie, but I am thoroughly pissed about being without GarageBand. :evilmonkey   *Snicker* *Snork* *Ha-ha-ha!*  When I think of Apps that could & probably should be included in a package called “iLife,” GarageBand is definitely not one of them.  How about Pages?  How about Numbers?  How about something that’s actually useful to someone over the age of 19?

So, anyway, that is my current Apple status.  I’ve got a shiny new iPad & a shiny new Mac—along with most of the bells & whistles that can be used with them.  And I’ve been using the iPad.  Not a lot, & not nearly as much as I probably should be, but a little.

The Mac, however, hasn’t been turned on since Rob & Michelle did their giant overhaul.  Partly because I’m still just too darn scared & intimidated, & partly because I really don’t have time right now to learn another major piece of technology.  Not when I’m on deadline & my gram’s in the hospital.  Once things are a little less hectic around here, I’ll probably have to do a whole new Migration to get all of my info refreshed from the PC to the Mac, then maybe I can sit down & learn how everything works.