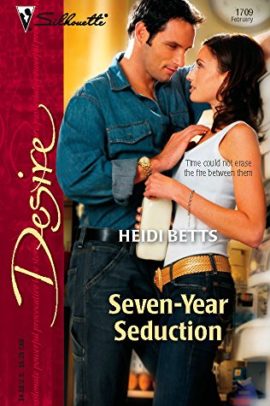 Time could not erase the fire between them…

Connor Riordan was the last person Beth Curtis wanted to walk down the aisle with, even if it was only at her brother’s wedding. Being close to him was too painful a reminder of her girlhood fantasies—featuring none other than Connor himself.

That crush had culminated in one night of passion and seven years of bitterness; and even now, Beth’s anger warred against her attraction to Connor. Still, there was too much history, too many secrets, that would prevent her from ever loving him again.

But when a storm strands the two together, Beth is in for a surprise. Connor has a secret of his own—he plans on seducing Beth. A seduction seven years in the making…

“Seven-Year Seduction is destined for your keeper shelf. Another winner for Heidi Betts!” ~CataRomance.com

I have to say that I am loving Heidi Betts! She is quickly becoming my favorite Silhouette author. Seven-Year Seduction is the perfect quick romance fix! Both Connor and Beth have to face the past before they can work on the future, giving the story a great deal of emotional depth. The passion that burns between them makes for scintillating love scenes. Readers of contemporary romance will most definitely find themselves satisfied by Seven-Year Seduction. ~JoyfullyReviewed.com

“What are you doing here?” she asked, not kindly, grasping for the edges of a robe that wasn’t there. Instead, she was standing in the middle of her family’s kitchen, covered only by the paper-thin camisole she’d worn beneath her bridesmaid gown.

Last night, after she’d dug her brother’s spare house key out of the flower bed where he kept it hidden in the bottom of a resin lawn ornament and climbed the stairs to her old bedroom, she’d shrugged out of the pink and green concoction, but left the camisole on. With spaghetti straps and a hem that hit high on the thigh, it was no more revealing than any of her other satin nighties.

Besides, she’d been alone in the house…just her and Dom Perignon . . . and not expecting guests.

“I could ask you the same thing,” Connor responded, setting his mug on the countertop and grabbing a paper towel to blot at the stain on his shirt, just above the waistband of his low-slung jeans.

Lord, he wore denims like no one else she’d ever seen. Even out in L.A. where every waiter or valet was an aspiring actor or model, the men didn’t have waists and hips and buttocks like Connor Riordan. They would never be able to pull off the open flannel shirts over faded t-shirts the way he did, or the worn blue jeans and work boots.

Not that it had any effect on her whatsoever. She was merely making a mental observation, the same as she might be slightly awed by a famous, high-powered celebrity who waltzed into her office back on Wilshire.

“In case you’ve forgotten, this is my house.”

She lifted a brow, her annoyance growing in direct proportion to the pounding in her skull. What she wouldn’t give for a cup of that coffee and fifty aspirin right about now.

But she couldn’t have those things just yet. Not until she’d finished this argument with Connor and kicked him out on his tight-but-aggravating butt.

“Since I grew up here. Remember?”

“That was a long time ago,” he remarked, picking up his mug once again and taking a slow sip of the black coffee that was making her mouth water. “Seems to me it’s not so much your house anymore. Your parents moved to a smaller place on the other side of town, and you moved all the way to Los Angeles. It’s your brother’s place now…his and Karen’s.”

Beth’s teeth gritted together and she felt her right eye begin to twitch, which it only did when she was resisting the urge to clobber somebody.

“I’m still family,” she told him, jaw clenched tight so that her words sounded half-growled, even to her own ears. “This is my family home, and I’m sure Nick won’t mind me staying in my old room for a few nights while he’s on his honeymoon.”

Like she owed him any explanation! Honestly, this was her house—her family home, at any rate. He was the interloper. He should be the one defending himself and offering up explanations for why he was here.

“Well, sweetheart,” he drawled, “that’s where we might have a problem. Because Nick told me I could stay here until he gets back.”

Scowling, she let his words sink in, all the while wishing her brother were nearby so she could wring his neck. Was it too much to ask that she be allowed to stay in her childhood home while she was in Ohio? Alone. To rest and recuperate before going back to her mile-a-minute world and no-rest-for-the-weary occupation.

“Why do you need to stay here?” she wanted to know. “Don’t you have a house of your own to go to?”

She could have sworn he blushed at that. His cheekbones turned a dull red and he refused to meet her gaze.

“Yeah,” he said in a low rumble. “You’d think that would make a difference.”

“I got kicked out, okay?” he grumbled, crossing his arms over his chest and slouching against the counter cabinets.

He was pouting. And looking decidedly embarrassed, Beth thought.

Oh, the day was taking a turn for the better, after all.

She perked up, fighting the urge to giggle at his obvious discomfort and reversal of fortune.

“You got kicked out,” she repeated, trying not to sound too gleeful. “Of your own house. Why?”

The flush disappeared from his face, then, replaced by the flat, grim line of his mouth.

“Never mind why,” was his terse reply. “The point is, I needed a place to stay, and your brother offered the use of his house until he and Karen get back from their honeymoon.”

It was her turn to cross her arms. At this point, she didn’t even care that the gesture pushed her breasts up and caused the flimsy satin and lace bodice to bunch and reveal a fair amount of cleavage.

If it offended him, fine. If it turned him off, so be it. And if it turned him on . . . good. Maybe he would feel intimidated by his attraction to her and hightail it to the nearest hotel.

Or back into Lori-Lisa-Laura’s open arms.

Okay, that didn’t set as well with her as the two previous possibilities, but still . . . whatever got him out of her brother’s house while she was there.

“Well, you can’t stay here,” she told him again, more firmly this time.

“Oh, no? You want to call Nick in Hawaii, interrupt whatever he and Karen are up to at this particular moment—” he waggled his eyebrows to indicate what he predicted they’d be doing, and probably wasn’t far off the mark “—and ask him exactly who his choice is for houseguest while he’s gone?”

“Sure,” she said, calling his bluff. “I’m pretty sure he’ll pick me, considering how I’m his sister and all. His blood relative.”

“And I’m his best friend since fifth grade,” Connor put in. “Not to mention invited. Does Nick even know you’re here?”

“Of course, he knows I’m here,” she fired back.

When she’d first been making arrangements to return to Ohio for his wedding, she’d offered to get a hotel room. Wanted to, to be honest. But Nick had insisted she stay at the house.

“It’s your house, too,” he’d cajoled. “And besides, Karen and I will be leaving right after the reception. You’ll have the whole place to yourself.”

She’d agreed, partly because she didn’t want to hurt his feelings, and partly because she’d been looking forward to coming home, sleeping in her old bedroom, and just being alone with her thoughts and her memories for a few days.

So much for that, she reflected now. She hadn’t even been able to wake up and get a cup of coffee on only her second morning back without coming face-to-face with her greatest nemesis.

Well, part of that may be true, but she’d be damned if he’d keep her from her daily shot of caffeine a second longer.

Marching forward, she grabbed a ceramic mug from the cupboard just above Connor’s right shoulder and poured herself a cup of rich, black coffee from the still-hot carafe. She crossed to the refrigerator to add a dollop of milk, then leaned back against the opposite countertop to stir in a spoonful of sugar.

She took a sip, savoring the sweet, creamy brew before Connor’s voice interrupted her momentary enjoyment.

“So if Nick knows you’re here, and he knows I’m here, I guess that means he thought the two of us could act like mature adults and stay together in the same house for a while without killing each other.”

Beth swallowed another great gulp of coffee before spearing him with a saccharine grin. “He’d have been wrong,” she quipped.

“Come on, Beth Ann.” He set his coffee on the counter with a clink, sliding his thumbs into the front pockets of his jeans as he shifted to face her more fully.

She cringed at his use of both her first and middle names together, hoping he didn’t notice. If he did, he would call her that all the more just to annoy her, the same as he had when they were kids.

“Can’t we get along well enough to rattle around this place together for a few days? I’ll stay out of your way if you stay out of mine.”

I’d rather chew broken glass, she thought, downing the last of her coffee, then moving to refill her cup.

“I sincerely doubt it,” she told him bluntly.