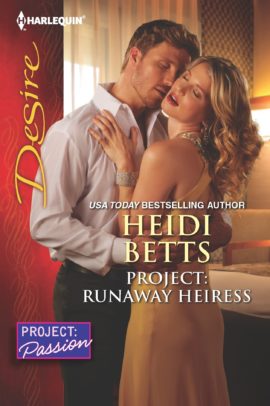 When her designs keep showing up on a rival’s runway, heiress and fashion designer Lily Zaccaro vows to catch the thief.  She comes up with the perfect plan—run off to L.A. and go undercover as personal assistant to the other label’s CEO, Nigel Statham, aka the sexiest Brit alive.

As long work days turn into sizzling nights, Lily struggles to stay focused on her secret mission.  She desperately hopes that Nigel is innocent because their relationship is anything but!  In the face of so much deception, pretty soon their newfound love is hanging on by a thread…

There's no denying Betts's hand at sizzling romance keeps the story moving along at a smooth pace, aided by an interesting variety of supporting characters and an intriguing ongoing mystery. ~RT BookReviews

Her fingers were cool and delicate inside his own much larger ones. For a moment, he savored the simple touch, not letting himself ruin it by imagining more just yet.Then he gave her a tug, urging her to the edge of the chaise. A second tug pulled her to her feet.She came into his arms as though she was tied to him and he was drawing on the string that bound them. Another step and she was pressed to his chest the way he’d wished she could be earlier.Her blouse was silky against his palms and the front of his own dress shirt, her breasts rubbing just enough to give him ideas and get the blood pumping hot and thick to his groin once again. He held her there, enjoying the feel of her, stroking his hands up and down the line of her spine.To his great delight, she didn’t pull away, but sank into him even more, her breath blowing out on a soft sigh.With one hand at the small of her back, he brought the other up the length of her arm and the side of her throat until he cupped her jaw, his thumb brushing along the baby-soft curve of her cheek.

“I want to kiss you,” he told her in a low, graveled voice, “but I’m afraid you’ll think I’m moving too fast.”

Afraid he was moving too fast and that he would scare her off. Afraid that this overwhelming need he felt for her wasn’t normal, wasn’t the typical interest he felt when he was in the mood for a one-night stand.

“Did you notice my hair?” Jessica asked in little more than a murmur, reaching up to finger a few strands of blue.

His brows knit. What did her hair have to do with anything?
Still, he answered, “Yes.”

“And my ears? My brow?” She flicked her wrist at both.
“Yes,” he said again, more confused than ever.

“These are not the piercings and hairstyle choices of a girl who scares easily.”

For a second, he didn’t move, didn’t dare breathe while her words sank in. Then a slow smile spread across his face.

“No,” he murmured, even as his head lowered toward hers. “I guess they aren’t.”

The minute Alex’s lips touched hers, she was lost.

She knew this was a mistake. Everything was, from the moment she’d stepped into his suit tonight, to letting her guard down over wine and a moonlit stroll onto the secluded balcony. Maybe even before that, when she’d recognized him and not gone running, or when she’d agreed to her cousin’s ridiculous scheme.

It hadn’t been easy to sit still and pretend she didn’t know who he was, but it had been somewhat enlightening to listen to him talk about himself and his business. Knowing what she did about him—namely that he’d stolen a portion of the company out from under her family—she would have expected him to be proud, arrogant, boastful.

Instead, he’d been humble, speaking highly of Bajoran Designs, but not taking any of the credit for the company’s success for himself.
She thought that might have been when her head had started to go fuzzy and stars had formed in her eyes. Her skin had been flushed with heat, too, but that was nothing new; that was just part of the attraction that had flared to life as soon as she walked into his arms.

She shouldn’t be kissing him . . . or rather, allowing him to kiss her. It was a worse idea than agreeing to dinner with him, but she just couldn’t seem to help herself.

The entire time they’d been talking, all she’d wanted was to cross the balcony and lay a hand on his chest. To see if it felt as hot and hard as it looked. And then to touch his mouth with her own to see if he tasted as delectable as she imagined.

The good news was, his chest did feel as hot and hard as she’d thought it would. Better, even, pressed up against her breasts and her belly.

And his lips were as delicious as she’d expected. Warm and soft, but with a firmness that bespoke of power and total self-confidence. He also tasted of the lush wine and food they’d shared earlier.

The bad news was that his chest felt exactly as she’d expected, his mouth tasted even better, and instead of allaying her curiosity, it only made her want more.

With a groan, she leaned further into him, letting his heat and strong arms surround her, letting the passion sweep her away.

It was just a kiss, just one night, and he had no idea who she really was. What could it hurt to surrender to whatever this was igniting between them and just let go?

Besides, it wasn’t as though anyone would ever find out. Erin would think she’d searched Alex’s suite and come up with nothing, and Alex would think he’d gotten lucky with a near-anonymous hotel maid. No strings, no ties, no awkward morning after.

His mouth possessed her, but she certainly didn’t mind. If anything, her moan, the melt of her body, her meeting his tongue swipe for swipe and thrust for thrust told him exactly how much she liked it.

Liked it? Loved it and was eager for more.

Not bothering to breathe—who needed oxygen?—Jessica wrapped her arms around Alex’s neck, running her fingers through the hair at his nape and hanging on for dear life.

It was Alex’s turn to groan. He hugged her tight and she felt his arousal standing proud, leaving no doubt that he was just as turned on as she was, just as carried away on this wave of uncontrollable lust.

Thank goodness. She would hate to be coiled in a haze of desire, only to discover he’d been after nothing more than a quick kiss.
But she needn’t have worried. He was all but sucking her tonsils down his throat. And then his hands went to her waist, her hips, her thighs a second before he scooped her into his arms.

They broke apart, only because the change of position forced it, and it turned out people really did need oxygen eventually. Their gasping breaths followed them back into the suite as he carried her across the balcony and through the French doors, his long strides eating up the thickly carpeted floor all the way to the bedroom.

Once there, he set her on the end of the wide, king size bed with more gentleness than she would have managed if their roles had been reversed. Standing over her, he stared into her eyes, his own crystal blue ones blazing like hot ice.

With both hands, he cupped her face, tipping her head back a fraction of an inch. Then he leaned in and kissed her softly, almost reverently.

Jessica’s eyes slid closed, letting the sensation of his lips on hers wash over her, carrying her away.