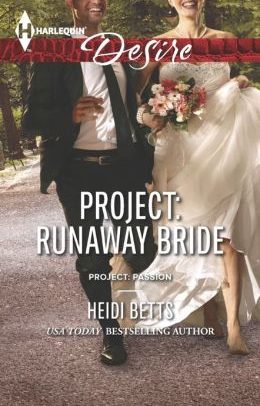 Handbag designer Juliet Zaccaro should be walking down the aisle, so why is she running out of the church instead? Because she’s just found out she’s pregnant, and not by her cruel, distant fiancé!

Now it’s up to private investigator Reid McCormack to bring her home. But once he finds her, he’ll make sure she doesn’t go back to her fiancé—especially since the baby she’s carrying might just be Reid’s.

Even as Juliet denies their explosive chemistry, can Reid convince her that there’s more between them than a baby

…the second tale in the ‘Project: Passion’ series by Heidi Betts, and readers are in for a treat of a read. An intriguing tale that pulls you in from the first, I highly recommend Project: Runaway Bride.“ ~Romance Reviews Today | Full Review

The delight in this sweet, sexy story is watching Juliet figure out what she wanted for herself and find the strength to settle for nothing less.” ~reader D. Antonio

Juliet Zaccaro stared down at the little plastic wand in her hand, clutched between shaky, white-knuckled fingers.

It was one of those kits that promised one hundred percent accuracy. No doubts. No second-guessing. And that was definitely a giant blue plus sign, glaring back at her like a flashing Broadway marquee.

Her stomach tightened, her lungs following suit. Knees growing weak, she took a single stumbling step sideways and sank onto the closed toilet lid in a cloud of gauzy white crepe and tulle.

A laugh verging on hysterical tickled its way up her throat, but she tamped it down. Pressed her lips together to keep it from spilling out, because she knew if she didn’t, she might never stop.

It was her wedding day. Here she was in the cramped bathroom off the small-but-serviceable room at the rear of the church where she’d been getting ready, and she was very unexpectedly, very this-is-not-good-news pregnant.

She should have taken the test days ago rather than waiting until her hair and make-up were done and she was trussed up in her one-of-a-kind fairy princess gown designed and hand sewn by her sister, Lily. Hadn’t she suspected for more than a week now that the dizziness, the headaches, the upset stomachs were more than simply pre-wedding jitters? But she’d been so afraid she was right, so afraid she might actually be pregnant that she couldn’t bear to find out for sure.

And then she’d looked at herself in the mirror, seen herself as a bride about to walk down the aisle, and realized she wasn’t blushing, she was flushed. She wasn’t glowing with happiness, she was radiating dread. And that was just at the prospect of saying “I do.”

When she stopped to consider the fact that she might, indeed, be pregnant, all of her doubts, all of her fears, all of her second thoughts just grew louder and louder until they were nearly deafening. That’s when she knew she couldn’t wait any longer to take the test and find out for sure.

Now she knew . . . but she had no idea what to do about it. She couldn’t very well walk down the aisle and start a new life with a man who most likely wasn’t . . . most likely? who was she kidding? . . . definitely wasn’t the father of her child.

Dear God, her child. A baby. She was really and truly pregnant. Which meant it wasn’t just about her anymore. She wasn’t going to be the only one affected by whatever decisions she made from this moment forward. She had to start thinking like a mother, putting her child’s safety and happiness ahead of her own.

A tap on the bathroom door startled her out of her deeply spiraling dark thoughts. She lifted her head as her sister’s muffled voice came from the other side.

Her words were happy, encouraging, meant to uplift. Instead, they made Juliet’s stomach drop.

She didn’t know if she could become Mrs. Paul Harris. Or even if she should.

Taking a deep, shuddering breath, she called out, “I’ll be right there. Just one more minute.”

“All right. We’ll be waiting in the vestibule.”

Juliet waited until her sister’s faint footsteps trailed off and the outer door closed. Then she pushed herself to her feet with the help of the porcelain vanity and glanced at her reflection in the mirror above the sink.

Not bad, as long as everyone waiting in the pews out front was expecting a Corpse Bride. Her skin was leeched of every ounce of color, making the eye shadow, rouge, and lipstick her sister, Zoe, had so carefully applied look like that of a practiced geisha.

Brushing a finger beneath each of her eyes, she wiped away any lingering trace of unshed tears and made sure her eyeliner and mascara were still intact. Then she fluffed out the diaphanous folds of her gown and dropped the plastic test stick into the small wicker wastebasket beside the sink. A second later, she leaned down and shook the basket so the wand fell to the very bottom. She certainly didn’t want someone accidentally finding a positive pregnancy test in the bridal staging area and taking the time to put two and two together.

As ready as she was ever going to be, she left the bathroom and crossed the main room, slowly turning the knob and opening the outer door only a crack. The hallway was empty, thank goodness. Another moment’s reprieve.

Opening the door the rest of the way, she stepped out. The muted whispers of her sisters and father reached her from where they were waiting only a few yards away.

Turn left and she would be at the start of the aisle, stepping her way into a new life to the strains of “The Wedding March.”

Turn right toward one of the church’s side doors and she could escape. It would be a new life of sorts, too, but one about which she was much less certain.

Her chest rose and fell with her increasingly shallow breaths. Her heart began to race like a greyhound after a rabbit.

Left or right? Go through with the wedding and her promise to Paul, or throw it all away and dive head first into the great unknown?

Time seemed to slow as her ears filled with the hollow, echoing sound of ocean waves. And then she did the only thing she could do. She turned right . . .