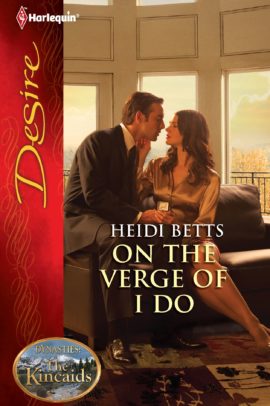 It's hard for events planner Kara Kincaid to be planning her sister's wedding to the man Kara's had a crush on since childhood. Even harder when said sister calls the whole thing off. Hardest still is when the jilted groom shows Kara some very personal attention, threatening to destroy her relationship with her family---and Kara ends up in his bed anyway.

After a just-friends engagement that just didn't work, hotel magnate Eli Houghton thinks he's finally found the right woman. His new plan: convince Kara there's no hidden agenda, and that the magic words are I do...

"The ongoing mystery of the Kincaid clan, the mixed-up romantic tensions, and a hero to die for make this entry into the series a page-turner, and it could prove to be one of the most popular chapters in the ongoing story." ~4 1/2 stars, RT BookReviews | Full Review

"On the Verge of I Do is a fantastic read that I highly recommend. If you love friends-to-lovers tales as much as I do, then you'll enjoy this one. Pick it up before it disappears from the bookshelves." ~Romance Reviews Today | Full Review

A book by Heidi Betts is always a delight to read. On the Verge of I Do has some amazingly witty exchanges, and a hero and a heroine to die for. They may be perfectly matched, but we can feel Kara’s indecision, knowing that her sister will not approve of her involvement with her ex-fiancée. Eli, however, knows when everything is as it should be---he just needs to convince Kara. Join in on the fun with Heidi Betts and On the Verge of I Do, and follow along as Kara and Eli go from friends to lovers. You will not be sorry!" ~CataRomance.com | Full Review

The elevator doors slid open and they stepped inside. Eli swiped his pass key and punched the button for his private suites, then brought her around so they could face forward while remaining in physical contact. Otherwise, she was sure they looked perfectly professional, perfectly normal.

The doors slid closed, shutting them in together, alone. One minute she was staring at their blurry reflection in the polished silver of the double elevator doors. The next, she was spinning like a top, coming to rest between the hard wall of Eli’s broad chest at her front and the cool steel of the doors at her back.

“I can’t wait one more minute to do this,” he growled.

She opened her mouth to ask Do what?, but didn’t get the chance to voice the first syllable before his mouth crushed down on hers. It took her completely by surprise, cutting off her oxygen and making her muscles go limp as noodles.

Against her better judgment, when his tongue licked the seam of her lips and he attempted to nudge his way inside, she let him. It was just a kiss, after all. Just one . . . tiny . . . kiss.

Somewhere over their heads, a bell dinged. The sound didn’t have time to register in her fog-laden brain before the doors behind her slid open and she fell backward.

Eli stumbled after her, catching them both before they ended up in an undignified pile on the foyer floor. Keeping them on their feet, he continued backing her across the entryway until she was once again stopped by a wall. He pinned her there with his body, touching her from collarbones to knee bones.

He kissed her again, not nearly as gently as he had in the elevator. If the kiss in the elevator could be called gentle, which is couldn’t. But he didn’t wait for her compliance, didn’t give her time to adjust or a chance to open her mouth in invitation. He simply leaned in and took what he wanted.

For long, languid moments, they stood there, tasting, touching, letting the rest of the world spin out of control. His hands clutched her waist. His erection pressed into her belly. In return, she pawed at his shoulders, her nails kneading him through the material of his suit jacket like a kitten kneading for cream.

When he released her mouth, she gasped. Then, while she was sucking air into her scalded, much-abused lungs, he caught her off-guard by scooping her into his arms.

She let out a startled yip to find herself suddenly horizontal, literally swept off her feet.  “What are you doing?”

“What do you think?” he retorted without inflection, not sounding the least bit out of breath, even though she was still struggling not to pant.

Now that he wasn’t muddling her mind with steamy kisses and subtle strokes of his hands up and down her sides, she could almost think straight, and she knew this wasn’t right. Knew they couldn’t do what he was carrying her off to do.

Pressing a palm to his rock-solid shoulder and wiggling slightly in his embrace, she said, “Eli, no. We can’t do this.”

Reaching the bedroom doorway, he elbowed open the pocket doors and headed straight for the massive king size mattress at its center. The entire room was decorated in shades of the ocean—sand, turquoise, salmon—and the bed was made up with a thick golden comforter with enough pillows stacked against the woven bamboo headboard to build a fort.

That’s all she had time to notice, though, as he carried her around to the side and set her on her feet so he could begin tossing those pillows onto the floor and tearing back the covers. Snowy white sheets in what she was sure was the finest Egyptian cotton lay beneath, just begging to be dirtied and rumpled.

Uh-oh. She took a step back in self-preservation.

“Oh, no, you don’t,” he mumbled, grabbing her wrist and tugging her toward him.

Her hands went up to stop her from bumping into his chest, but he apparently wanted her to do just that, because he kept tugging until she made contact with a solid thump.

“We can’t do this, Eli,” she said again, trying desperately to make him see sense.

“Yes,” he returned with even more resolve than before, “we can.”