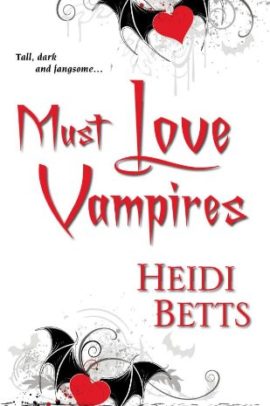 Nightclub dancer Chloe Lamoureaux just met the man of her dreams:  Aidan Raines is charming, considerate, rich, and hot.  Of course, he’s a little mysterious about his age.  And his favorite drink.  And he’s not much for sunlight.  But he’s asked her to marry him, and she’s ready to do it. Sure, she has a few secrets too---but they’ll have plenty of time to work things out while they’re living happily ever after.  Right?

Her identical twin sister, Chuck, isn’t so sure.  Maybe reporting for the local Bigfoot-sighting tabloid doesn’t make her an expert, but to Chuck, Aidan and his brother Sebastian look like honest-to-Dracula vampires.  Especially Sebastian:  beguiling, seductive, and just a hint of dangerous.  Maybe she wouldn’t mind him taking a little taste.  But with Chloe’s life in the balance, she has to know—do they want hot love or hot blood?  Or maybe...a little of both?

"Heidi Betts pens another culinary masterpiece for our reading pleasure with Must Love Vampires. ... Heidi Betts is truly a Master of Metaphor, or perhaps just skillful at similes or handy with humor. However you label her, Must Love Vampires is filled with humor, metaphor, and similes, used in such a way as to delight and entrance the reader. Must Love Vampires will take its place on your keeper shelf." ~Debby, SingleTitles.com | Full Review

"Whether you know vampires are in your life or not, Must Love Vampires is a must read for everyone looking for something different and special for your reading enjoyment. I heartily recommend Must Love Vampires and its author Heidi Betts. " ~Romance Reviews Today | Full Review

About "Vampnapped" from Must Love Vampires: "'Vampnapped' is a hysterical and gorgeous romance! It’s impossible not to fall in love with Chuck and her indelible nature. She is smart and spunky, with a side of crazy. I’d be willing to follow this character anywhere. Sebastian is your typical hot vampire, although he’s a little too serious for his own good. Chuck’s about to change all that! The scene with the wine is my favorite. I think I laughed so hard my stomach hurt!

About "Married...with Fangs" from Must Love Vampires: "Chloe and Aidan make 'Married…with Fangs' a hit! Chloe and Aidan are superb as the typical Vegas couple that rushes into marriage before exposing all their deep, dark secrets. Both of these characters are great, but Aidan appealed more to me here. Aidan, a vampire who has been around for awhile, is actually just now getting around to growing up." ~Miranda, JoyfullyReviewed.com | Full Review

Chuck couldn’t believe it. She was sitting on the sofa beside an honest to goodness vampire. A vampire!She was almost giddy with excitement. Sure, there was a fair amount of trepidation roiling in her belly, too, but mostly she was just too darn pleased with herself.Even if Sebastian went all feral and ate her for his supper, she figured she’d die happy in the knowledge that she’d been right! She wasn’t crazy, and she hadn’t let the wild imaginings of her previous stories for the Tattler get her all whipped up over nothing. Sebastian Raines was definitely something.Whoo-howdy, was he ever. Was it wrong to be sitting here, drinking his wine, silently writing up bullet points for her article, and lusting after him like a sailor on shore leave? Well, like the female version of one, anyway, whatever that might be.“I want to interview you,” she blurted out suddenly, bouncing up on her knees on the soft sofa cushions.It had never occurred to her before—probably because she’d never intended to actually come face to face with him. Follow him around his own casino, dig into his past and present, and sneak through his penthouse looking for clues to his otherworldliness, sure. But actually sit down with him and ask him questions directly? It was an underpaid tabloid reporter’s dream come true.

Careful not to spill her wine in all her sit-up-and-shake puppy dog excitement, she asked, “Would you let me?”

His dark lashes fluttered over his even darker eyes. “I’ve never been interviewed,” he replied slowly. “Get more requests each week than you can imagine, but I’ve never granted a single one.”
“I know.”

And she did; she’d scoured the internet, old newspapers and magazines, even microfiche, for God’s sake, for any hint of something personal about Sebastian Raines in Sebastian Raines’s own words. She’d found nothing. Oh, there had been plenty of articles written about him—about his properties, his multi-million dollar corporations, even a few with a where-did-this-guy-come-from? tone—but always from an outsider’s perspective.

With a small inclination of his head, he said, “I told you I’d tell you everything, so I will. But my frankness comes with a price.”

Chuck’s heart leapt. Whatever it was, she would pay.

Did he want actual cash? Probably not, since he had about nine thousand, sixteen trillion more dollars in his bank account than she did, but she was still willing to offer.

If he was more in the market for a live-in maid, or even a live-in mistress . . . well, she was up for that, too. She’d already been drooling over him from afar, so putting herself out there like that (ha—putting out) for the story of a lifetime wouldn’t exactly be a hardship.

As for the other . . . well, she could scrub a toilet as well as anyone, she supposed.

“You won’t remember anything once I finish.”

She blinked, slamming on her brain’s brakes and laying rubber until she could pull a mental U-ie. Wait. What?

“What?” she repeated aloud, knowing she was blinking like a camel in a sandstorm.

He said her name as though he didn’t particularly like it, and definitely wasn’t used to calling a woman by a man’s name. She got that a lot.

“What does that mean?” she asked carefully.

She honestly didn’t know which made her feel more sick to her stomach. Swimming with the fishes would be bad, but not being able to use the most coveted interview on the planet would be devastating. Heartbreaking. Even if he didn’t put her in cement shoes and drop her to the bottom of Lake Tahoe, she would probably take a voluntary dive off the Hoover Dam, anyway.

“It means that I can answer your questions. I can tell you everything you’ve ever wanted to know. But when we’re done, your memory of this evening will be completely erased and you’ll remember nothing.”

“How . . .” When her voice squeaked on the word, she paused, collected herself, and tried again. “How exactly will that happen?”
One corner of his mouth quirked up in a self-deprecating grin. “Come now. Do you think all vampires do is drink blood from unsuspecting victims?”

Inside her chest, Chuck’s heart was ka-thump-ka-thump-ka-thumping to beat the band. Holy hell on a hamburger bun. That was as good as an admission that he was, indeed, a vampire.

Granted, he hadn’t come right out and said, “Why, yes, ma’am, I am a bloodsucking fiend of the night. Wanna see my fangs?”

But she’d seen the fangs, hadn’t see? No full-on, double fang action, but there for a second, just a minute or two ago, she’d definitely seen . . . more tooth where most people had less tooth.

And though she hadn’t asked him directly whether or not he was a vampire, she’d certainly made it clear that’s what she was after, and nothing he’d said so far led her to believe his answer would be no.

The glass in her hand trembled, and her lips started to go numb. Was she having a heart attack? Was this what one felt like? Or maybe she was simply on the verge of a panic attack.

Either way, this was IT. Big I, big T, nothing was ever going to top this in her entire life. If she one day gave birth to a litter of porcupines and got into the Guinness Book of World Records, she would still look back at the night she’d sat across from an honest-to-goodness vampire and gotten the story from his very own blood-stained mouth, and consider it the most exciting thing that had ever happened to her.

But could she go through the most exciting event of her life, get all of her nagging questions answered, know she’d finally proven that vampires really did exist . . . and then consent to having it all wiped away as though it never happened?

She thought about it for all of about a milli-second. The time it took for her fingers to flex more tightly around her wine glass and her gaze to once again zero in on Sebastian’s impressive, almost Romanesque profile as he reached for the bottle to refill his own glass.

Yes. Yes, she could. She had to know. Wanted it more than her next breath or her daily top secret Snickers bar.

It killed her, absolutely killed her to think that when she woke up the next morning, she might not remember a single thing about tonight, but it was a risk she was willing to take. Who knew, maybe his vampire mojo or whatever it was wouldn’t work. Maybe she would wake up not only remembering the events of this evening, but as far back as having her ass slapped by the doctor when she’d been born.

A frown crossed her face as one last thought occurred to her. “This whole . . . erasing my memory thing,” she murmured, nibbling at one side of her bottom lip. “It doesn’t involve any sort of electro-shock or frontal lobotomy-type stuff, does it?”

He chuckled. “No, I assure you it’s entirely non-invasive. Except for the loss of recent memories, of course.”

Taking a deep breath, she nodded, and forced the words past a throat closed tight with anxiety. “All right. As long as you promise not to leave me a drooling vegetable staring at Phineas and Ferb all day, I’m in.”

She waved off his question with a flip of her wrist. “It’s a cartoon. For kids.” Something she knew only because she spent way too many hours awake when she should be asleep, with only the Disney Channel for company.

“No, I will not leave you drooling over this Phillius on Verb, or anything else. You’ll be perfectly fine, except for a few missing hours of your life you’ll probably wonder about. After a while, you’ll even forget that they ever went missing.”

“Then I want to know,” she told him, making her voice strong and sure in hopes of convincing herself, as well.

He inclined his head. “Where would you like to start?”

Well, shoot, she wasn’t expecting that. Her brows crossed. Where did she want to start?

She already knew he was a vampire. At this point, that was a given. He’d never come right out and admitted as much, but . . . yeah, it was a given.

And she assumed he drank blood, couldn’t go out in sunlight, and had been around since the invention of the wheel or soon thereafter. The whole nine undead yards.

She wanted to know more than just the everyday minutia of an immortal’s existence. Although, yes, she was sure that was all fascinating. She’d come back to it later. But for now, she wanted to dig deeper, learn something a little more substantial than whether or not he slept in a coffin or had to carry dirt from his native land in his pants pocket twenty-four/seven.

When she thought about it, what she wanted to know most was really pretty simple. And probably what had driven her to go after Sebastian like a pitbull with this “there’s a vampire living in Las Vegas” theory in the first place.

Licking her lips and meeting his steel gray gaze, she asked, “How does it feel to know you’re going to live forever?”