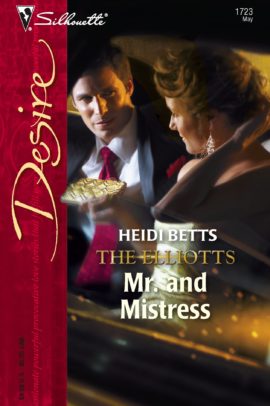 She was his kept woman…a secret lover living in Las Vegas luxury. It had been an ideal situation—until Misty Vale discovered she was carrying Cullen Elliott’s child.

Misty was not the type of woman a millionaire like Cullen could ever take as his wife. Her past was scandalous…his family above reproach. How could she ever tell him she was having his baby?

But Cullen had ways of finding things out. And he wasn’t about to allow his heir to be born on the wrong side of the bed!

The Elliotts: Mixing business with pleasure!

"Mr. and Mistress is another winner for Heidi Betts and the Elliott series. From the very start, the chemistry between Cullen and Misty is palpable. Their love for each other shines off the pages. Everything Misty does, she does because she does not want to cause Cullen pain. Cullen is quite the gentleman and realizes that he wants to marry Misty not only for the baby but for himself as well. His actions to convince her makes this one amazingly romantic story. Mr. and Mistress will touch a part of your heart and leave you with that tender, delighted feeling that only a good book can give you. Kudos to Heidi Betts for writing another excellent story for our reading pleasure." ~CataRomance.com

“I’ve never read a Heidi Betts book I didn’t like, and Mr. and Mistress is no exception. I loved the fact that Misty was a little older than Cullen, and the passion between them smoldered from page one. While the pregnancy storyline is one that is used often, Heidi Betts writes it so well, I found myself unable to stop turning pages. Readers who enjoy Silhouette books will want to add Heidi Betts to their auto-buy lists, and I wouldn’t be surprised if we see her soon with longer length novels in the very near future!” ~JoyfullyReviewed.com

She was hurting him, when that was the last thing she ever wanted to do. Didn’t he understand? Didn’t he realize that marrying her would ruin him?

She would step in front of a bus before she’d ever knowingly do anything to cause him pain or humiliation. And whether he realized it or not, marrying her was a one-way ticket to both.

Besides, no matter what Cullen said, she didn’t believe his bone-deep sense of duty played no part in his offer. She knew perfectly well that his brother, Bryan, was the result of an unplanned pregnancy. His father had gotten his mother pregnant at age eighteen, and Cullen’s grandfather had forced them to marry. But after two children and twelve years of marriage, they’d divorced.

Misty didn’t want that for herself or her child. And she didn’t want Cullen sacrificing his happiness and future because of the guilt and responsibility that had been drilled into him from childhood.

She implored him with her eyes to recognize where she was coming from. “Please don’t be angry, Cullen. It’s a very sweet offer, and I know you’re doing what you think is best, but I won’t marry you just because the condom broke or we got a little careless.”

Resting a splayed hand on her belly, she told him, “I want this baby, too. I’ll be a good mother, and you don’t ever have to worry that I’ll deny you custody or any of your rights as a father. I would never do that.”

He studied her for long minutes like a bug under a microscope. Her pulse quickened and she found herself squirming nervously at his close scrutiny. She couldn’t even begin to guess what he was thinking or what his response might be.

“Have you given any thought to the doctor’s instructions?” he asked finally, obviously struggling to control his emotions. “If you’re not careful, you’ll wind up back in the hospital—or worse, lose this baby.”

At the very thought, a cold chill whipped through her. She wrapped both arms around the innocent life resting safely in her womb and hunched over slightly, her protective instincts already kicking in.

“I won’t lose this baby,” she said, and it was both a promise and a prayer.

“You will if you keep pushing yourself. The doctor said you collapsed from exhaustion and dehydration. The student from your class who called to tell me you were being rushed to the emergency room said you’ve doubled up on some of your classes and had extra ads put in the local papers to drum up more business.”

“I may have overdone it a bit,” she admitted, “but I won’t let it happen again.”

The blue of his eyes flashed briefly like sapphires under glass. “Why were you doing it at all?”

There it was, the sixty-four thousand dollar question. She took a deep breath, then slowly exhaled.

“You know as well as I do that the studio is struggling. With a baby on the way, I thought it would be prudent to get as much money as possible coming in before I have to stop teaching altogether. Lord knows I can barely support myself right now, let alone a child. I don’t even have enough to hire someone to come in and cover for me during the last few months of my pregnancy, until I can get back to teaching the classes myself.”

“You think I wouldn’t support my own child?” he growled, brows snapping together in fury. “I’ve been supporting you well enough for the past three years. Did you expect me to suddenly cut you off because I found out you were pregnant?”

She sighed. As hard as she’d tried to avoid it, she’d managed to bring his anger at her back full-throttle. Sliding off the sofa, she crawled on her knees across the soft, beige carpet to his side. She wrapped her arm around one of his jean-covered legs, her fingers resting on his wide, strong upper thigh.

“Of course not,” she replied quietly. “I didn’t mean it like that. But, Cullen, I can’t keep letting you pay my bills forever. I appreciate everything you’ve done for me. God knows what would have happened to me after my knee injury if it hadn’t been for you. But I told you from the very beginning that I would pay back every penny of the start-up costs you put into buying this building and renovating it so I could live and hold classes here.”

“Hell of a gift,” she muttered, only half under her breath. She knew for a fact he’d put more than a hundred thousand dollars into helping her get the studio up and running, and that didn’t include the generous chunk of money sitting in her bank account, earning interest even as they spoke.

“The point is,” he said, stressing the words just enough to let her know he was changing the direction of the conversation, “you aren’t going to be able to teach classes for much longer. You probably shouldn’t be teaching at all, considering where it landed you the last time. And then what? Are you just going to sit here, letting me send money for both you and the baby until the well runs dry?”

She opened her mouth, a vehement denial immediately on the tip of her tongue, but he held up a hand to stop her and continued on.

Her heart began to pound, her stomach rolling and pitching like an amusement part ride. “What do you want, then?”

He took a deep breath, his chest puffing out as air filled his lungs, and covered the hand she had on his leg with his own. His broad, well-trimmed fingers engulfed her much smaller ones, the heat of his palm soaking into her bloodstream to warm every inch of her body.

“Come back to New York with me.”

“What?” She sat back, startled. It was the last thing she’d expected to hear.

“Come to New York with me. You can’t cancel classes and keep the studio open, but you can’t continue teaching, either. And I know you, Misty…without something to do, you’ll be bored out of your mind in a week.”

He squeezed her hand, the simple action conveying the importance of his plea.

“So come to New York with me. It will be good for the baby. You need to rest, and my townhouse is quiet and comfortable. Plus, I’ll be there to wait on you hand and foot.”

For the first time, she felt a stirring of amusement. “Hand and foot, huh?”

A suggestive sparkle lit his eyes. He slid his fingers beneath her hand and turned it palm up before lifting it to his mouth.

“Hand,” he whispered, pressing a kiss to the very center, “and foot.”

He molded his lips to the tip of one finger, sucking it gently into his mouth. A tidal wave of desire washed over her, sending her insides to quivering. If she hadn’t already been sitting, bottom propped against her heels, she thought for sure she would have slid to the floor in a puddle of raw nerve endings.

“Misty?” he asked softly. “Are you listening?”

It took a moment for his words to sink in, and another moment to find her voice. Even then, all she could manage was a weak, “Mm-hm.”

The haze of longing clouding her vision slowly began to clear. His parents? He wanted her to meet his parents?

Dear God, she could just picture the introductions. Mom, Dad, this is Misty, my pregnant ex-showgirl mistress. Their eyes would bug out and their mouths would drop open…but only long enough for them to collect their wits and start in with the hostile glares at her and the lectures to Cullen about mixing his pure blue Elliott blood with that of a dancer of low breeding and obviously low morals.

She’d rather walk down the crowded Vegas Strip buck naked.

Her eyes widened. “That’s what you expect in trade for everything you’ve done for me?” she asked, incredulous.

“I meant, you owe me a few considerations for keeping this baby a secret for the past four months.”

Well, he had her there. But still…meeting his parents? Wasn’t that a bit above and beyond?

“Besides,” he went on, “it doesn’t have to be forever. Consider it a short vacation. You can come back here any time you want.”

Still holding her hands, he got to his feet, pulling her up beside him. He drew her close and she went willingly, because it was where she felt safest, most comfortable.

Being in his arms was like sinking into a warm, scented bubble bath after a long night of dancing under blazing hot stage lights in four inch heels and a headdress that weighed as much as a small car. Only better.

“And you never know,” he murmured next to her ear while he caressed the swell of her waist. “Maybe seeing where I live and meeting my family will change your mind about accepting my proposal.”

Leaning back, she met his hopeful, expectant gaze and made her decision. For better or worse, she did owe him something for keeping the pregnancy a secret for so long, and for all he’d done for her over the years—not the least of which was making her feel protected and special when any other man would have only made her feel like a whore.

“I’ll go with you to New York,” she told him, and was rewarded with a wide smile that revealed a row of straight, white teeth, as well as his pure, unadulterated happiness.

“But I won’t marry you,” she cautioned before he could get carried away. She waved a pointed finger under his nose for emphasis. “That’s not part of the bargain.”

His grin didn’t waver as he lowered his head and covered her mouth with his own. “We’ll see.”