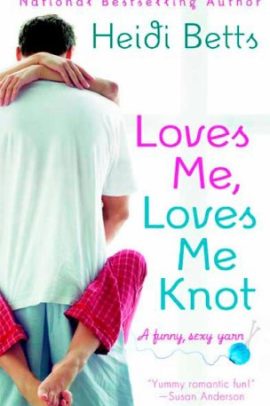 THIS IS KNOT YOUR AVERAGE LOVE STORY
Jenna Langan knows what she wants, and as she tells her best friends after their weekly knitting group, she doesn’t need a man to give it to her…only a few of his best swimmers. And just because her marriage to undercover vice cop Gage Marshall ended badly doesn’t mean he can’t still give her the baby she’s always wanted. In fact, she’s willing to bet a couple of her favorite hand-knit boas that she can tie him up in knots he’ll definitely enjoy…

BUT TRUE LOVE IS MORE THAN JUST SKEIN DEEP
An unexpected seduction is one thing, but stud service? No, thank you. Gage had his reasons for pulling the plug on his happily ever after with Jenna, and nothing that’s happened since their divorce has changed his mind. That is, until Jenna got it into her head to tie him up and drag him down. Now he has no choice but to stick around until he knows for sure if his ex-wife is pregnant. But the more time he spends with Jenna, the more his resolve begins to unravel…

"After reading this sequel, if you haven’t already added Ms. Betts to your favorite authors list, you will. And you’ll be anxiously awaiting the next installment of this wonderfully witty series." ~Night Owl Reviews

"...a winner on all levels. The characters are well-developed as we get into their thought process, and the romance action is non-stop. I am totally looking forward to the next book!" ~Love Romances & More

“Oh what a wickedly sexy yarn Heidi Betts weaves in Loves Me, Loves Me Knot. So much action takes place in this witty tale that the reader can barely keep up. Amid giggles, sighs and laugh-out-loud scenes, Ms. Betts ensnares and entertains from the very first page." ~SingleTitles.com

“Deliciously funny and wickedly delightful from beginning to end, Heidi Betts’s Loves Me, Loves Me Knot is a story I highly recommend you put to the top of your “Must Have” list.” ~Romance Reviews Today

"You don't have to be a knitter to love Betts's brand of comedic romance---it will just add an extra dimension to your enjoyment of this hot, tender story of lost love reclaimed." ~RT BOOKReviews

"Heidi Betts spins a yarn of love gained, lost, and then gained again. The relationships of all the characters are light, whimsical, and endearing!" ~ReaderToReader.com

"Heidi Betts was written another winner with Loves Me, Loves Me Knot. Smart, sexy, heartwarming, and downright funny, readers are going to love Jenna and Gage’s story. As soon as Jenna and her friends start scheming, we know we are in for a wild ride. I love everything I’ve ever read that Heidi Betts has written and Loves Me, Loves Me Knot just confirms for me once more that Heidi is star material. I can’t wait for the third 'Chicks with Sticks' book, Knock Me for a Loop!" ~CK2S Kwips and Kritiques

When the phone rang at ten minutes after ten, Gage Marshall had already been asleep for about forty minutes.

It didn’t say much for a thirty-three-year-old man to be passed out in front of the television so early on a Friday night, but his life hadn’t exactly been a thrill a minute lately.

If his friends had been in town, he probably would have met them for some beer and fries down at The Penalty Box, but since they were both on the road for the next couple of weeks for an off-season charity event with some of the other players from the Cleveland Rockets, he was on his own. And on his own meant cold pizza, the last remaining Rolling Rock from a six-pack in the fridge, and whatever half-interesting ten-year-old action flick he could find on the tube.

Even work didn’t seem to do it for him these days. He still enjoyed going undercover for the CPD, but he wasn’t on an active case right now, which gave him more down time and more time to devote to paperwork than he would have liked.

But he’d made his bed, he supposed, and now he couldn’t even bring himself to sleep in it.

Scrubbing a hand over his face, he pushed himself up from the couch and searched for the remote to mute the TV. The phone continued to ring, shaking his brain like a snow globe until he grabbed up the hand set and barked, “Yeah?” into the receiver.

A second passed with nothing but dead air and he was about to hang up–after muttering a few colorful invectives the prankster wouldn’t soon forget–when a soft, tentative voice played over the line.
“Gage?”

For a minute, he thought he might still be asleep. Maybe he was dreaming, because there was no earthly reason he could think of that she would voluntarily call him. Not after the way they’d parted and the length of time they’d been divorced.

“I’m sorry to bother you,” she said tentatively while he continued to rub his eyes and try to make sense of the alternate universe he’d apparently fallen into sometime between arriving home from work and waking up passed out on the sofa.

“But I’m at Aunt Charlotte’s house all alone, and there’s something wrong with the pipes under the sink upstairs. There’s water everywhere, and I’m afraid it’s going to start soaking through the floor into the downstairs ceiling.”

Her words trailed to a stop, but only so that she could take a deep breath and dive in again.

“Normally, I’d ask Dylan or Zack to come over and help me out, but they’re both out of town right now. And I’d call a plumber, but you know how expensive they are for evening and weekend visits, and it makes me a little nervous to think about inviting a stranger to come out here with no one else around. Could you . . . I mean, would you mind . . .”

She paused again, and he could picture her licking her lips and shoring up her confidence before continuing.

“I hate to inconvenience you, but is there any chance you could come out and take a look? I’d just die if Aunt Charlotte came home from her trip to a house that looked like it barely survived a hurricane.”

Gage’s brain was still slogging along, trying to process the fact that his ex-wife was on the phone and that she’d called him willingly. Not only willingly, but to ask him for a favor. It was like an episode of The Twilight Zone, and that do-do-do-do do-do-do-do theme started to echo in his head.

Scratching his chest through the worn cotton of his t-shirt, he cleared his throat and said, “Yeah, okay. Sure.”

He checked his watch, calculated the distance to Charlotte Lanigan’s isolated farm house from his apartment in the city, and added, “Give me half an hour.”

When Jenna responded, the words seemed to come out in a rush. “All right, I’ll be here. Thank you.”

There was a loud click and then he was left with nothing but a dial tone buzzing in his ear.

Ten minutes later, boots and jacket on, Gage walked to his older model, nondescript gray, unmarked car, small metal tool box in hand. He didn’t know a lot about plumbing, but he figured he could tighten a few fittings or replace a pipe or two, if needed, just to get Jenna through the rest of the weekend.

The real problem wasn’t how he’d manage to fix a leaky faucet, but how he was going to handle being alone with Jenna for the first time in two years. Away from their small group of friends; away from the boisterous crowd at the bar where they hung out; even away from her odd, mop-headed little aunt.

And he didn’t know who he should be more concerned for. Jenna . . . or himself.