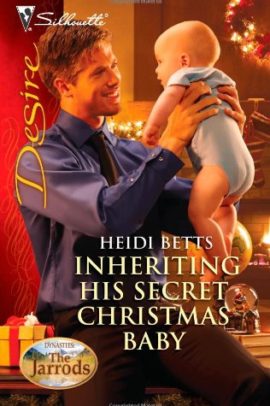 This wasn't the type of Christmas present he'd been expecting. Trevor Jarrod—a daddy? Yet the enticing woman seated in his office claimed the Aspen businessman was the father of her baby nephew. Quick as he could say paternity test, Trevor discovered she was telling the truth. But just what did this revelation mean? The confirmed bachelor knew nothing about being a parent. And Haylie Smith wasn't about to hand off the precious infant to a complete stranger.

If Trevor really wanted to claim his unexpected heir, he had an important choice—head to court…or head to the altar!

"The changing emotions Haylie and Trevor feel in Inheriting His Secret Christmas Baby make it a heart-tugging read. Plus, add in Heidi Betts’s saucy writing, a cute baby, and a couple who are truly engaging with tons of chemistry, and readers will find this tale one they won’t want to put down, nor want to end. It’s books like these that deserve A Perfect 10 from Romance Reviews Today." ~A Perfect 10, Romance Reviews Today | "In the final installment of 'Dynasties: The Jarrods,' Betts neatly dovetails all the storylines and hands readers a blazingly sexy finale." ~4 1/2 stars, RT BOOKReviews | Full Review

"Inheriting His Secret Christmas Baby by Heidi Betts was the perfect ending to a perfect series, The Jarrods. ...a happy ending for this incredible series, thanks to Heidi Betts. It's a six book series you won't want to miss. " ~5 stars, Marilyn's Romance Reviews | Full Review

“Any messages?” Trevor Jarrod asked his assistant, running his fingers through his dark hair to brush away any excess moisture.

Getting to her feet, she handed him a stack of pink papers. More than he was in the mood to deal with at the moment.

“Before you go into your office . . .” she began, only to let her words drift off, her bottom lip disappearing between her teeth as she worried it nervously.

She took a breath and met his gaze. “There’s a young woman waiting for you. She’s been calling, and insisted on seeing you in person. I started to turn her away, but didn’t have the heart, and . . . well, I just thought she was someone you should deal with personally.”

He frowned. Diana might be pixie-petite, but he’d seen her in protective, full linebacker mode. The woman in his office must indeed be brave to have gotten past her. Brave, or very convincing.

Diana shrugged. “You’ll have to ask her yourself. She didn’t say, she was just . . . very determined.”

With a sigh, Trevor folded the stack of messages and stuffed them in his pants pocket. “Fine. I’ll take care of it.”

Pulling open both of the heavy oak doors that separated his office from the reception area, he paused to take in the sweep of his office. The thick Gulistan carpeting. The unlit fireplace built of smooth river stones lining the back wall. And in the center of the room, his heavy, ornately carved desk with its lamp at one corner, computer monitor at the other, and stacks of paper at the center.

But no woman in either of the guest chairs waiting to see him.

Closing the doors behind him with a click, he stepped farther inside. As the sound echoed through the room, his espresso-dark leather desk chair tipped slightly before swiveling around to reveal a lovely woman with honey-blonde hair and blue eyes. On her lap, leaning back against her chest, was an infant busily chewing on his own hand.

Trevor frowned. Well. The woman was no surprise; Diana had warned him one was waiting to see him. His so-called assistant had failed to mention, however, that said woman had a child with her.

What kind of woman came to a business meeting with a baby in tow? he wondered. Even an impromptu meeting that—judging by the way this one was starting—might not last long.

“My secretary said you needed to speak with me,” he said, rounding the desk with every intention of taking her place and relegating her to one of the guest chairs.

If he’d expected her to hop up and bashfully bustle around to the other side of the desk, though, he was doomed to disappointment. She held her ground, remaining seated in his executive chair—the one he had special ordered and waited nearly a month for it arrive, the one that had taken another month to break in and now cushioned his body like a glove during each of the many long hours he put in here at Jarrod Manor—while she bounced the child up and down on her knees.

“I’m Trevor Jarrod,” he offered when she didn’t seem eager to fill the chilly silence.

“I know who you are. I’ve been trying to reach you for the past two months.”

Her tone was flat with a trace of annoyance threading through, but also light and extremely feminine. Lifting a hand, she swept a chunk of her straight blond hair behind one ear, revealing a single ruby red stud that matched the knit vee-neck sweater she was wearing with a pair of sleek black slacks.

The baby on her lap was dressed in a pair of blue denim overalls with an embroidered train engine on the front pocket and a shirt underneath with dozens more trains covering the white cotton. A boy, Trevor assumed, otherwise he would be looking at a little denim jumper covered in pink butterflies or some such.

As though he sensed Trevor’s perusal, the baby gave a smiling gurgle and kicked his legs out in front of him.

Dragging his attention back to the woman who’d fought so hard to gain an audience with him, but suddenly seemed at a loss for words, Trevor crossed his arms over his chest and lifted a brow. “And you are?”

That brought her to her feet, shifting the child in her arms until he was perched on one hip.

How did women do that? Were they born knowing how to hold babies, change diapers, and distinguish between eighteen different types of cries?

Of the six Jarrod children, Melissa was his only younger sibling. Which meant he didn’t have a lot of experience with babies. Even being this close to one, with his mother right there, ready, willing, and able to react to his every need, made Trevor more than a bit uncomfortable.

Clearing his throat to cover the fact that he’d nearly taken a step back, away from the woman and her child, he waited. She still owed him a name and an explanation for her presence, and he had work to do.

“My name is Haylie Smith.”

He blinked, waiting for her to elaborate. Instead, after several a long seconds ticked by, she tipped her head and let her eyes go wide, as though she’d just delivered a punch line, but he didn’t get the joke.

“I heard you,” he murmured, fighting the twitch at the corner of his lips as they threatened to lift in an amused grin.

It wasn’t often that he was treated like the slow kid in school. Very few would dare. Because while he was known to be fairly laid back and fun-loving, even flirty at times when it came to women, he was also a Jarrod. One of the heirs to Donald Jarrod’s vast fortune, and a successful entrepreneur in his own right.

He was rich, and he was powerful. And while it might take a lot to shake him from his easy-going nature, he wasn’t a man other men wanted to risk pissing off.

That this stranger—a woman, no less—seemed to have no compunction about going nose to nose with him was more arousing than it should have been.

Not that she wasn’t an attractive woman. At what he estimated to be about five feet four or five inches to his six-two, she was tall, but not too tall. She was also far from reed-thin, but nowhere near fat, either. She had curves in all the right places, pressing against the front of her sweater and filling out the hips of her slacks. The kind of figure that would feel soft and warm against his hard chest and firm thighs.

Her long, straight hair was like bottled sunshine and framed a heart-shaped face that was a fascinating mix of innocence and sensuality. The rosy bow of her mouth, the sharp, crystal blue of her eyes, the way she held that baby with both confidence and possessiveness . . .

None of it should be turning him on, since he was about three seconds away from booting her out of his office, but damned if he wasn’t starting to feel a tell-tale warmth in his blood and tightening in his gut.

Unfortunately—or maybe fortunately—she didn’t seem to be suffering the same physiological response to him.

“I’ve been calling you for the past two months,” she charged impatiently. “Leaving messages that you apparently couldn’t be bothered to return.”

With a nod, he moved around her and took his rightful place behind his desk. “My secretary mentioned that. Although I can’t understand what’s so pressing if you weren’t willing to leave details about why you wanted to speak with me.”

Just as he’d intended, his near-dismissal of her caused her to move back around to the front of his desk. She didn’t sit, though, instead standing directly in front of him while she bounced her hip and wove back and forth in a calm, gentle motion he assumed was for the baby’s benefit.

“Some things are better said in person. And I didn’t think you would appreciate your secretary being privy to your personal business.”
At that, his brows drew together and he dragged his attention from the folder on the desk in front of him to her glittering gaze.

“I’m sorry, but I’ve never seen or heard of you before. What kind of personal business could you possibly have with me?” he nearly scoffed, wondering if this woman might be slightly unhinged. Maybe she’d convinced herself she was yet another long lost Jarrod heir. Or maybe she’d seen one too many photographs of him in the local and national tabloids, and had convinced herself that she was one of his many feminine conquests.

He was debating the wisdom of getting up to open the double doors again, and possibly even buzzing for hotel security, when she switched the baby from one hip to the other and began to round his desk again—in the opposite direction this time—with slow, determined steps.

“You’re right, you don’t know me. We’ve never met. But a year ago, you met my sister, and from what I’ve heard, the two of you had a heck of a good time.”

She stopped in front of him, towering over him in a manner he definitely didn’t appreciate. He sat back, prepared to launch to his feet and stare her down, if necessary, but her next words glued him in place.

“And maybe if you returned a phone call once in a while, it wouldn’t have taken me two months to track you down and introduce you to your son.”

With that, she plopped the baby unceremoniously on his lap before leaning back to cross her arms beneath her breasts and look down at him with what could only be described as a satisfied smirk.

Want to read the entire “Dynasties: The Jarrods” series in order?