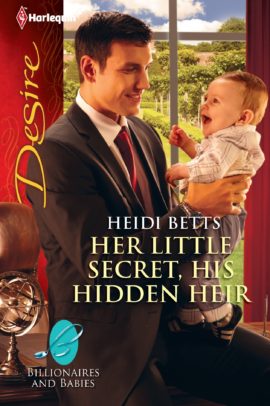 Face-to-face with his ex-wife again, millionaire Marcus Keller received more than a jolt of deep attraction---he discovered he was a daddy. Vanessa had been pregnant when they divorced, bore him a son and kept it a secret. It was a betrayal he couldn’t forgive.

There was no way he would walk away from his child…his heir.  The businessman would do his best to be civil to the lovely bakery owner, who was one tough cookie in her own right.  But would it only be business between them, or would Marcus indulge his own secret agenda to make this woman his again…once and for all?

"Betts has a way with family dramas, and this steamily sexy romance plays all the angles of misunderstanding, misdirection, and consuming passion." ~4 1/2 stars, RT BookReviews | Full Review

"Heidi Betts has penned an engrossing, fun tale in Her Little Secret, His Hidden Heir that I highly recommend." ~Romance Reviews Today

“We’re divorced, Marcus,” she pointed out, as though he weren’t painfully aware of their current marital status. Or lack thereof.

She stormed around the room, gathering her clothing piece by discarded piece. “Divorced couples aren’t supposed to sleep together.”

“Maybe not, but we both know it happens all the time.” He waved a hand to encompass the rumpled bed and their current states of post-coital undress.

“Well, it shouldn’t,” she argued back, doing her best to hold up the sheet while she struggled into her underwear. “Besides, you hate me.”

A beat passed while the air in the room sizzled with growing tension. “Says who?”

At the softly spoken question, Vanessa jerked to a halt and lifted her head to meet his gaze. The lower half of the sheet, which had been hiked up around her thighs while she fought with her panties, fell to the ground.

His brows crossed and his mouth dipped down in a scowl at the reminder. He’d been working hard to forget that part of his reason for being in town. Or more to the point, had been willing to suspend his anger and feelings of betrayal long enough to partake of Vanessa’s lovely body and enjoy the tactile sensations of having her in his arms and bed again after so long.

Taking in her still half-naked form, wrapped like a Greek goddess in pristine white cotton, all of the reasons he should hate her were still there. And no doubt they had many issues to work out. But for some reason, at that moment, he just couldn’t get his temper to flare.

“Here’s a bit of advice,” he told her, cocking a brow and trying not to let his frown slip up into a grin. “When someone has temporarily forgotten that they have a reason to be mad at you, it’s probably better not to remind them.”

“But you should be mad at me,” she said quietly, holding his gaze for a long, drawn-out second before turning her back to him and continuing to dress.

Marc watched as she struggled with her bra, then let the sheet fall as she hooked the bit of lingerie behind her back. He watched the light play on the pale canvas of her skin and the smooth lines of her body as she moved.

Interesting, he thought, fighting the urge to drag her back to bed. She seemed to want him to be angry with her.

On the one hand, at least he knew she hadn’t slept with him in an effort to cloud his mind and seduce him into forgetting that she tried to keep his son from him. On the other, she’d have been wise to do almost anything to stay on his good side at this point. To avoid acrimony, a possible custody battle, or to keep him from simply picking up and taking Danny home with him, leaving her few options to get him back.

Granted, before today, he hadn’t spoken with Vanessa in over a year, and the fact that she’d left him meant he probably hadn’t understood her all that well to begin with. But the only explanation he could think of for why she felt the necessity to remind him of what stood between them was that she needed something between them. A wall. A barrier.

Oh, they’d work out some sort of custody agreement. On that, he would insist. And he was sure Vanessa wouldn’t argue too strongly against it, not now. Agreeing to let him see Danny on a regular basis or even let him take their son back to Pittsburgh for the occasional extended visit would be the lesser of two evils for her now.

But he’d been in big business long enough to know that when someone gave up something too easily, it was usually because they were trying to get or retain something even more important to them. His best guess was that Vanessa was trying to retain distance.

She’d wasted no time moving to Summerville the minute their divorce was final, and as far as he could tell, she’d been perfectly happy settling in with her aunt and making her mark on the small town through The Sugar Shack.

If Fate hadn’t somehow intervened to bring him here himself, he never would have known where she’d relocated to or that she had a child. His child.

Oh, yes, she’d wanted distance then, and she wanted it now. And if she pissed him off–or kept him pissed off–then he’d be less likely to stick around for any length of time, wouldn’t he?

Which only made him want to stick around more. He was contrary like that sometimes, a fact Vanessa was well aware of. She should have known that if he caught on to her little plan, he’d make a point of doing pretty much the exact opposite, just to vex her.

Of course, there was a good chance she didn’t even realize she had a “little plan.” That she was running heavily on instinct, her current thoughts and actions more subconscious than anything else.

But it still intrigued him, and if he hadn’t wanted to stick around before just to be close to the child he hadn’t known existed, he certainly did now. He was even looking forward to it, considering the entertaining side benefits he’d recently discovered could be added to his stay.

Tossing back the covers, he moved to the edge of the bed and sat up. “Well, I’m sorry to disappoint you, but I don’t hate you.”

He pushed to his feet and walked toward her stark naked. Where she’d fought so hard to protect her modesty and stay covered, he didn’t bother and wasn’t the least bit self-conscious about his nudity.
When she saw him coming, she took a jerky step back, away from him, but he wasn’t really after her. Bending at the waist, he scooped up the tangled ball of his pants and underwear.

“I’m not happy about what you did,” he clarified, climbing into his clothes with slow, deliberate movements, “and I can’t say that I don’t harbor a bit of anger and resentment over it. Or that there won’t be moments when that anger and resentment flare hotter than anything else.”

He leaned down for his wrinkled shirt and shrugged it on, but didn’t bother buttoning it, instead leaving it open and his chest bare down the middle. “But we’ve covered that ground already. Keeping Danny from me—or the pregnancy to begin with—was wrong. That’s time and an experience I can’t get back. Now that I know I have a son, however, things are going to change. I am going to be involved in his life—and thereby in yours.”

She was standing only about three feet from him, clutching that red dress to her breasts to cover as much of her front as she could. It was silly and useless, a bit like locking the barn door after the bull had already escaped, but Marc found her false sense of modesty oddly endearing.

“You should probably come to terms with that,” he told her matter-of-factly. “The sooner, the better.”

She simply stood there, staring at him. Her eyes sparkled like polished sapphires, but whether with fear or rage or mere confusion, he couldn’t quite tell.

While he had her off balance—which was a nice switch, frankly, since she’d pretty much had him off balance from the moment he’d driven into town—he tossed another can of gasoline on the bonfire that just seemed to continue blazing between them.

“Here’s something else you should probably take into consideration,” he said quietly, widening his stance and crossing his arms determinedly in front of him.

Vanessa didn’t reply. Instead, she cocked her head, the tendons at the sides of her throat convulsing as she swallowed, waiting nervously for him to elaborate.

“We didn’t use a condom, which means that you may even now be pregnant with our second child.”