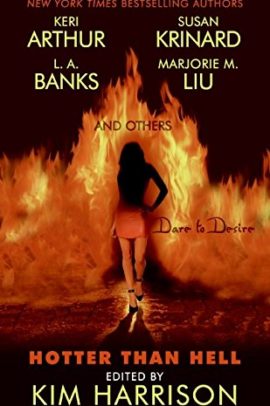 SURRENDER TO THE SEDUCTION OF THE OTHERWORLDLY…

Beyond the boundaries of the everyday is an unseen realm where anything you imagine is possible. Your demon lover is waiting for you in the shadows, ready to fulfill your secret wishes and most dangerous fantasies. Here passion has a face and form both titillating and terrifying–and love has teeth and claws. Get ready to give in to your craving for sometehing exquisitely dark…and different.

HOTTER THAN HELL gathers together a baker’s dozen of today’s boldest and best authors of supernatural fiction and paranormal romance in a breathtaking anthology that blends black magic and red-hot desire. From the tantalizing tale of a conflicted psychic vampire driven by a powerful, savage love to the strange saga of a Greek warrior woman battling to save the world, these are stories outside the limits, as hypnotic as the full moon…and hotter than the sun.

“With this incredibly talented line-up, readers are in for a wild and varied ride…with no shortage of intriguing characters and creative plots!” ~4 stars, Romantic Times BOOKreviews

She’d been asleep only a few minutes when the dream began. And she knew it was a dream, knew it was one of those dreams, even as she drifted through that delicate space between slumber and reality.

She was in Castle MacKay, curled up in her sleeping bag, but she wasn’t alone. It was no rat or spider keeping her company, either, but a man.

He stepped out of the shadows, all six-plus-feet of him, and walked toward her.

He moved slowly, making no sound as he crossed the earthen floor, giving her a chance to study him. He was bare-chested, wearing nothing more than a kilt and soft-soled, worn leather boots. His hair was black, tousled and long enough to brush his broad, well-formed shoulders. His green eyes glowed, looking serpentine in the dark, with their thin, vertical pupils.

And his flesh . . . every inch of that strong, impressive chest that she could see . . . was covered with a beautiful, almost iridescent sort of tattoo. But not of any picture or form she could make out. Instead, it looked like layer after layer of lovely, colorful . . . scales.

Even as that thought flitted through her brain, he was upon her, kneeling down and flipping back the top fold of the sleeping bag. Heat radiated from every pore of his body as he stared down at her, taking in her pale pink t-shirt with its hibiscus flowers and hula girl, advertising Hawaii as “a great place to get leied.” The hem had ridden up around her hips, leaving her stark white, French-cut bikini panties in full view.

He murmured a single word, low and emphatic, but in a language she didn’t understand, had never heard before she’d begun having these dreams. And then he was loosening the wide belt at his waist, kicking off his calf-high boots, and letting the blue, black, and green fabric of his family tartan fall to the floor. A second later, he was stretched out full length on top of her.

His mouth covered hers, furnace hot, sending flickering flames down her throat and to her very center. He bit, licked, sucked, devoured her like a starving man at an all-you-can-eat buffet. The firm contours of his muscled chest and arms pressed in on her, his legs straddling her own, the rigid length of his arousal rubbing against the soft material at the apex of her thighs.

She had been wet long before he touched her. One glance at his rippling, masculine body towering over her, and she’d turned liquid with fiery lust. Her nipples were puckered and jutting beneath the cotton of her top as she writhed beneath him.

His lips and teeth burned her flesh, tugged at her lips, skimming her cheek, trailing down the line of her throat. He lifted up only long enough to grab the bottom of her shirt in his large, long-fingered hands and strip it off over her head. Then he lowered his head again and feasted at her breast.

Her back arched on a moan, her fingers threading through his black hair as his tongue circled her areola, the budded tip, and then drew her fully into his mouth.

“Yes, please.” She scratched at his back with her nails, lifting, reaching for more.

The heat of his long, seeking cock brushing between her legs made her want him inside her now. Hard, hot, fast. She rotated her hips, trying to hurry him, trying to take him in, even before she was fully naked.

And–thank you, Jesus–he took the hint. His rough, callused fingers traced her waist, and then her legs, taking her underwear with them. Without ceremony, he shoved her legs apart, settled himself between them, and thrust home.