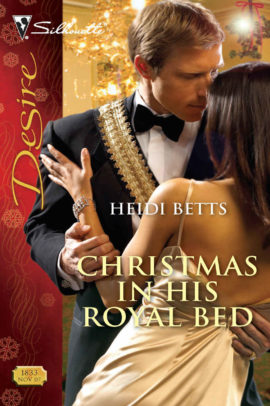 
OWNED BY THE PRINCE

The moment Prince Nicolas saw sultry Alandra Sanchez, he wanted her for his mistress. Determined to have her in his bed by Christmas, he lured her with a job at his island palace. Nicolas would stop at nothing to satisfy his lust, including seducing her with a little royal treatment. Soon his fiery passion began to awaken Alandra’s own forbidden desires. But would she leave him once she discovered he was about to enter a loveless royal marriage?

She’d become the prince’s paramour…but would she ever be his wife?

“Heidi Betts is one of my favorite Silhouette authors for a reason. That reason being her ability to weave her stories around my heart so much so that I find myself totally absorbed and unable to do anything but read. Christmas In His Royal Bed is one such novel. Heidi Betts gets a Joyfully Recommended with Christmas In His Royal Bed. I put this book down after reading the last word and rethought the story in my mind. I wiped my tears, because the book is downright emotional at times, and sat there. I sat there and thought about how amazing a read this was and thought about how soon I could get my next Heidi Betts fix! In November, run – don’t walk – to the nearest bookstore and acquire Christmas In His Royal Bed. It is truly magnificent.” ~Joyfully Reviewed

"Christmas In His Royal Bed proves once again that love cannot be denied no matter who you are, and it also proves that looks can be deceiving. How? You will need to pick up this wonderful book and enjoy the tale of Nicholas and Alandra as they learn about love and life in the pages of Christmas In His Royal Bed. Heidi Betts has never disappointed her readers and this one keeps that tradition going." ~CataRomance Reviews

Alandra was drawn from her thoughts when the limousine slowed and waited for a tall antiqued iron gate to slide open and allow them entrance. They drove up a long, winding drive that ran between two sections of pristine, well-manicured lawn before arriving in front of what could never be mistaken for anything but a palace.

The house—for lack of a better word—was somewhat historical in design, but looked updated and modern. Eggshell white, with pillars and balconies and a myriad of floor-to-ceiling, multi-paned windows everywhere she looked, it stood atop a small rise and overlooked the rushing waves of the Mediterranean.

As the driver opened the door and helped her out of the vehicle, she couldn’t tear her eyes away from the breathtaking view. She continued to gawk while he removed her bags from the trunk and escorted her to the front of the palace.

A butler opened the door and invited her inside, where a handful of maids dressed in matching gray uniforms collected her luggage and trotted off with it.

Rather than showing her where she would be staying, the butler said, “The Prince has requested you be brought to him immediately upon your arrival, Miss Sanchez. If you’ll follow me.”

Feeling as though she’d just stepped into a fairy tale, Alandra did just that, taking in every detail of the foyer as they passed.

The floor was expensive, highly polished marble in checked squares of black and a mottled white that looked almost gray. A chandelier the size of a small bus hung overhead, thousands of dangling crystals twinkling in the natural light. Directly across from the front entrance stood a wide staircase leading halfway to the second level before branching off to either side.

The butler led her to the right of the foyer, still on the first floor, and down a carpeted corridor lined with priceless artwork and closed doorways. He paused at one of these doors and knocked. When a low, muffled voice bade him entrance, he stepped inside, announced her presence, and then moved aside for her to pass.

The personal office was decidedly masculine, with a dark area rug, built-in bookshelves lining three of the four walls, and a large cherry wood desk taking up a good portion of the room.

Dragging her gaze from the impressive surroundings, Alandra turned her attention to the man sitting behind that desk . . . only to feel her eyes go wide and her mouth fall open.

“Miss Sanchez.” He rose and regally rounded the desk until he stood directly in front of her. “How good of you to accept my offer and come to work for our family.”

“Nicolas Braedon of Glendovia, yes. You may call me Nicolas.”

Nicolas. The same Nicolas who had asked her over for a glass of champagne and then invited her to sleep with him.

Her mouth went dry with shock, her stomach clenching and her pulse kicking as hard as though she’d just run a marathon. At the same time, her palms turned damp and she feared her knees might give out on her.

How could this be happening? How could she have missed all the hints and clues?

She should have recognized the jacket he was wearing the night of the charity dinner, similar to the one he wore now that all but shouted “royalty.”

Or his reluctance to give her a full name when he’d introduced himself.

Or the name on the letterhead, with the one name he had given her right there in dark, raised script. Just because it was a middle name didn’t mean it wasn’t still the same name.

Looking back, there were any number of signs she should have picked up on, more research she should have done before accepting this position. It was enough to make her want to bang her head against the nearest brick wall.

“I don’t understand,” she said, her voice fainter than usual as she struggled to put her thoughts into words. “Why would you invite me to work for you after the way we parted after the hospital fundraiser? All you wanted from me then was . . .”

“Oh, my God,” she breathed, oxygen rushing from her lungs as shock coursed through her body. “You did this on purpose. You lured me here under false pretenses so that I would sleep with you.”

“Not exactly,” he replied, standing straight as a sword with his hands clasped behind his back. “Glendovia is very much in need of someone to organize its charitable foundations, and after seeing you in action, I decided you would be the perfect person for the job.”

“And you’ve changed your mind about wanting me in your bed?” she challenged.

His lip curled in what could only be described as a dangerous, predatory grin as he replied, “Oh, I wouldn’t say that.”