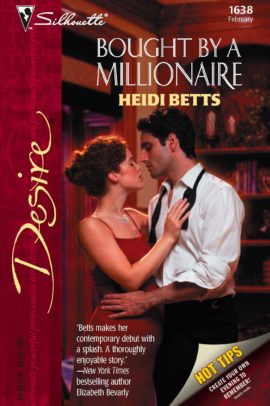 Chicago’s Most Eligible Bachelor, Burke Bishop, wanted a child—but didn’t want to be shackled by marriage. Surrogacy seemed the only solution, and when he met gorgeous Shannon Moriarity, he knew he’d found the perfect mother for his baby. For reasons she wouldn’t say, Shannon accepted his high-price offer and requested they keep things strictly business.

They conceived without touching, yet Burke found himself craving Shannon’s warmth and demanded she move into his penthouse. Soon, the close quarters elevated their relationship into intimate territory where neither could deny the bond they shared. But when their contract was fulfilled, would they find a prize richer than money could buy?

"Heidi Betts is adorable! And so is her book! Burke is a tough but tender hero, and Shannon is a plucky heroine who stole my heart. Bought by a Millionaire is at turns sweet and spicy, it made me chuckle and sniffle, and it left me feeling warm and fuzzy all over. Heidi makes her contemporary debut with a splash. A thoroughly enjoyable story." ~New York Times bestselling author Elizabeth Bevarly

Heidi Betts is known for her historical romances, and in Bought by a Millionaire she shows she can write contemporary romances. Ms. Betts is a fascinating storyteller, and Shannon and Burke will…capture your heart. Bought by a Millionaire is fast-paced…[and]…will tug at your heart as Shannon and Burke find love and happiness together. Pick up this enjoyable tale that brings together a lonely millionaire and a woman who shows him how to love. ~Romance Reviews Today

“5 Stars - Heidi Betts proves once again that she is indeed an author producing romance at its best. Her first Silhouette Desire, Bought by a Millionaire, is a captivating story that you won’t want to miss. This is one book that will really tug at your feelings as Burke learns to recognize and deal with emotions unfamiliar to him while Shannon’s desire to help her mother at her own emotional expense will really pull at your heart. Burke’s bewilderment at these emotions and Shannon’s efforts to protect herself are portrayed excellently. The chemistry between Shannon and Burke leads to some wonderfully sensual love scenes. Bought by a Millionaire will definitely please Ms. Betts’s readers.” ~CataRomance Reviews

“Bought by a Millionaire is the kind of romance I love to read when I want a pick-me-up. Heidi Betts does a wonderful job delivering the happily-ever-after I read romances for. Readers who are looking for a short, feel good romance will do well to pick up a copy of Bought by a Millionaire.” ~JoyfullyReviewed.com

Startled out of her reverie, she realized she’d been more focused on the curve of his full, attractive mouth than the words coming out of it. “Excuse me?”

He took her hand as he rose to his feet. “Dance with me.”

Setting her napkin on the table beside her empty dessert plate, she followed him through the maze of elegantly appointed tables to the polished oak dance floor. A full orchestra played a light, classic rendition of “I’m In the Mood For Love”, and although she didn’t know all the proper steps to this kind of music, she found herself leaning against Burke and simply following his lead.

He held her close, chest to chest, thigh to thigh. They moved in tandem, swaying back and forth as though they were the only couple on the dance floor. The only two people in the room.

“Has anyone ever told you how beautiful you are?”

Shannon fought her way through the lull of the music and Burke’s soft, possessive hold. She forced her heavy lids open to look him in the eye, and said, “It’s the dress.”

One side of his mouth quirked upwards. “It’s not the dress. Although that’s lovely, too, I’m much more impressed by the woman wearing the dress.”

The first slow song blended into next as they took another turn around the floor. His splayed hand moved lower on her back, tingling the bare flesh there and shooting sparks of awareness up and down her spine. When he pressed his cheek to hers, it felt like the most natural thing in the world.

She rubbed against the slight sandpapery texture, even though she knew he’d shaved just before they left for the evening. Soft to hard, smooth to rough, woman to man. It was real and right, and she wanted to freeze this moment in time so she could remember it forever.

Burke’s voice melted in her ear as he nuzzled her lobe and the patch of neck just beneath. “Let me take you home.”

She didn’t pretend to misunderstand. For one thing, she didn’t want to. Not anymore.

The orchestra, the atmosphere, Burke’s closeness all meshed together to beat down her defenses. She didn’t care anymore about propriety or keeping her relationship with Burke distanced and professional. She didn’t care about what tomorrow might bring or how many regrets they both might have.

For once, just once, she wanted to follow her heart. She wanted this adventure, with this man.