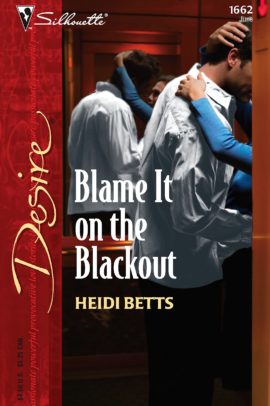 In the pitch blackness, trapped between floors, Peter Reynolds has almost convinced himself that the woman in the suddenly too-cramped-for-comfort elevator car was not off-limits…and that the desperate passion they shared would not change everything.

But then the lights came on, and Peter knew that he’d crossed more than one line. For Lucy Grainger was his secretary…and now, quite possibly, pregnant.

If Peter were any other man, Lucy would make the perfect wife and mother to his children. But he was not the marrying kind for reasons Lucy could never understand. Yet, if that were true, why was he secretly hoping that the stick turned blue?

"Blame it on the Blackout is another great Silhouette Desire from Heidi Betts. Ms. Betts skillfully drew me into Lucy’s and Peter’s relationship, deftly expressing the depth of a two year friendship transforming into love. I read Silhouettes for the short romantic stories, and Ms. Betts is quickly becoming a Silhouette author that I will be looking for to deliver just what I want: romance with a great happy ending that leaves me totally satisfied!" ~JoyfullyReviewed.com

"Blame it on the Blackout is a twist on finding love right under your nose. Well-written and believable characters breathe life into the story." ~(4 stars) Romantic Times BOOKClub Magazine

"I have never read a Heidi Betts novel that I didn’t enjoy. Blame It on the Blackout is no exception. With two excellent lead characters, a touch of humor and some wonderful loving, this is one book to be savored and enjoyed. Both Peter’s and Lucy’s trains of thought are delightful to read. Letting us get into their thoughts makes for characters we get to know and identify with. It also makes for some sexy, sometimes humorous reading. Blame It on the Blackout is one book you do not want to miss. Fantastic job for Heidi Betts." ~CataRomance Reviews

"Blame it on the Blackout is a fast paced, interesting novel with a common, complex problem at its crux. Lucy and Peter are likable, interesting, savvy people who take the business of creating a marriage seriously… Blame it on the Blackout is a book sure to leave you feeling good, and convinced that relationship problems can be worked on if complete love is involved." ~Romance Reviews Today

How could he be claustrophobic? And how could she not know about it?

She’d been working with him for two years now. She knew his favorite foods, his favorite color, his favorite pair of boxer shorts, for heaven’s sake. How could she have missed the fact that he was claustrophobic?

His response came out on a wheeze and she realized he was seriously downplaying just how upset he was by this sudden set of circumstances.

“All right, let’s not panic,” she said, as much to herself as to him. She moved closer, rubbing his arm, his shoulder. “The power will probably come right back on. Until then, why don’t you tell me how long you’ve had this little problem.”

“Forever. Long as I can remember.” A beat passed while he sucked in air like a drowning victim. “Is it hot in here? It’s too hot in here.”

She felt him struggling to shed his jacket even though she didn’t think the temperature had gone up a single degree since the lights went off. His high level of anxiety probably had his internal thermostat going haywire.

“Here, let me help.” She took the suitcoat, folding it in half and setting it aside in what she hoped was a safe corner.

“And what do you usually do when you find yourself in an enclosed space?” If she could keep him talking, maybe he wouldn’t think so much about where they were. She might even get lucky and figure out a way to keep him calm until the elevator started moving again.

This was a side of Peter she’d never seen before. Sure, he was slightly scattered, a bit of a computer nerd. More focused on the new program he was designing than whether his hair was combed or there was enough milk in the refrigerator for breakfast.

But, other than the occasional round of public speaking, he was also strong and self-assured. So handsome, he made her teeth hurt. And he was in better physical shape than anyone would expect for a man who spent twenty-three hours of most days staring a computer screen. He carried himself like a man with a mission; one who knew exactly why he’d been put on this earth and was simply going about the business of carrying out that task.

Little had she known he harbored this secret claustrophobia.

“Oh, God.” He was punching buttons again, growing more agitated by the second. “We’re going to die in here.”

She bit down on her lip to keep from laughing out loud at that outrageous pronouncement. “We are not going to die. Come on. Come over here and sit down.”

Taking his elbow, she tugged him away from the front of the elevator until they hit the rear wall. It took some doing, but she finally got him to the floor.

Covering his face with his hands, he muttered, “I don’t feel very well. I think I might be sick.”

“You’re fine. Everything’s going to be fine.” She brushed his cheek with the back of her hand, finding it warm and damp with perspiration. “Close your eyes.”

“If your eyes are closed, you won’t even know the lights are off. We’ll talk and pretend we’re back at the house, and before you know it, that’s exactly where you’ll be.”

He gave a raspy chuckle. “I don’t think that’s going to work.”

Running two fingers lightly over his eyelids, she whispered, “You never know until you try.”

His chest still heaved with the speed of his breathing and she could feel his body shaking against her own.

“You’re in your office,” she murmured, thinking she sounded an awful lot like a hypnotist. “Working on the latest version of Soldiers of Misfortune, throwing in some extra severed heads and damsels in distress. The kids will love it.”

“Too much violence. Should be more socially conscious.”

She laughed at that, knowing how much time he spent worrying that his computer games were too mature for their audiences. “You’re just socially conscious enough. Now focus. You’re at your desk, swigging down your tenth can of soda . . . I’ll be in any minute with your mail, and to chastise you for drinking too much of that sugar water.”

“Nectar of the gods.”

“The gods of Type-2 diabetes, maybe.” She played with the ends of his silky hair, trying to keep him from hurting himself as he banged his head rhythmically against the back wall of the elevator.

“You worry too much about me.”

His comment caught her off guard, and for a minute she didn’t respond. She did worry too much about him, but she couldn’t help it. She cared about him, too–too much. She cared that he worked long hours and didn’t get enough sleep, that he didn’t eat right and inhaled cola like it was oxygen. And she cared that he was so upset about being stuck in this elevator in the middle of a blackout.

“Not too much,” she said finally. “Just enough.”

Was it her imagination, or was he calming down? His breathing didn’t seem quite as loud now, and the fidgeting had slowed to a bare minimum.

A minute ticked by in silence while she waited to see if he was all right. If maybe he’d fallen asleep or really believed he was in his office, working on his latest Games of PRey installment.

But suddenly, the trembling started again, worse than before, and he shot to his feet. “This isn’t working. We have to get out of here before we run out of air. Why isn’t anyone trying to get us out?”

He pounded on the doors with his fists, shouting for help, on the verge of hyperventilating. Lucy made another grab for him, pulling him away, fighting the claustrophobia for his attention.

“Peter. Peter, stop. Listen to me.” She framed his face with her hands, able to see the barest outline of his silhouettenow that her eyes had adjusted to the darkness. “You’re okay. Everything’s going to be okay.”

“No, no, no . . .” He shook his head emphatically, not listening or unwilling to believe. “I can’t breathe.”

She could feel the pulse at his throat beating out of control and knew she was losing him. But what else could she do?

How did you calm someone who was on the brink of a breakdown?

The answer came to her in a flash and she didn’t give herself time to second guess. Leaning up on tiptoe, she pressed her lips to his, kissing him as she’d always imagined. Her fingers slipped from his cheeks to the nape of his neck, tangling in the slightly long hair growing over his collar.

He tasted of scotch and heat and just plain Peter, and she wondered why she’d waited two years to do this. It was crazy, it was wrong, but it was also so darn good, her skin was threatening to melt right off her bones.