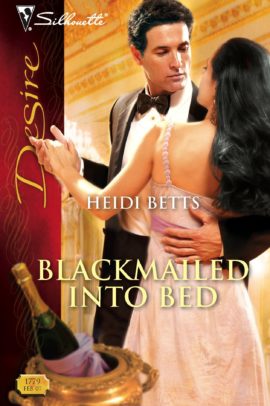 “I’ll expect you to sleep with me.”

Businessman Chase Ramsey’s audacious terms should have offended her, but Elena Sanchez had no choice. To save her family’s business, she’d have to become Chase’s mistress.

Chase had waited years to avenge what Elena had done to him. Now she’d have to play by his rules. But the ebony-haired beauty soon had him craving her like a starving man. Had his indecent proposal backfired?

"Blackmailed into Bed is one book that I will be reading again and again. Chase and Elena passionately heat up the pages. You can literally FEEL the emotions between them, leaving you unable to stop reading. Heidi Betts once again proves that she is an author to watch, and definitely one whose books are a not-to-be-missed treat!" ~Joyfully Reviewed

"…so hot it will singe your fingers…sexy as sin… The sensual interaction between Chase and Elena sizzles right from the first page of Blackmailed into Bed and provides readers with a very compelling couple to enjoy. With dazzling writing and fascinating characters, all pulled together into a captivating plot, Blackmailed into Bed has my vote as one of the best books of 2007 so far. I couldn’t put it down, and it richly deserves a Perfect 10 rating! I highly recommend that you put Blackmailed into Bed on your book shopping list today.” ~Romance Reviews Today

Elena Sanchez hadn’t changed a whit since he’d last seen her. Oh, she’d grown into a beautiful, breathtaking woman, but then, she’d been a pretty girl.

Where it really counted, though, she was exactly the same. She still expected her feminine wiles and her family’s wealth and reputation to get her whatever she desired.

Sanchez Restaurant Supply was apparently in enough trouble for her to feel compelled to try to help her father, instead of her usual attitude of letting daddy solve her problems, but it was obvious she expected Chase to see the situation from her perspective and be mesmerized enough by the bit of skin she was flashing below the hem of her skirt and between the vee of her lightweight blouse to give her what she wanted.

Too bad for her that Chase Ramsey was not a man to be led around by the nose . . . or any other part of his anatomy that women often thought they could use to control a man.

“I told you,” he said, with very little warmth to his words, “even if I had feelings about your family one way or the other, I wouldn’t let them interfere with a business decision.”

“Well, then,” she said shortly, getting to her feet and retrieving her purse from the seat of the other chair, “I guess I’ve wasting my time . . . and yours. Thank you for seeing me. I’ll let you get back to your work.”

He watched the rigid set of her shoulders and the sensual sway of her hips as she walked away, having the uncontrollable urge to call her back.

Why should he want to keep her with him a few minutes longer, when up until today, his fondest wish had been never to lay eyes on her again?

“Wait,” he called out, just as her long, red-tipped fingers curled around the knob of his office door.

Slowly, with obvious reluctance, she turned to face him.

“I’ve got a proposition for you,” he told her, pushing away from his desk and moving closer, stopping before his actions could be considered intimidating.

“I happen to be in need of a female companion. A beautiful woman to accompany me on business trips and to related dinners and events.”

He straightened his tie and smoothed the lines of his jacket. His statement was at least half true. He might not need a companion, but it certainly would be convenient to have one at his disposal. He just couldn’t figure out why he felt compelled to offer the position to this particular woman.

Which didn’t keep him from pressing forward, even though she had yet to respond.

“If you agree to be available to me whenever I need you, I’ll agree to give your father the same amount of time to do what he can to save SRS. A day, a week, a month . . . it’s entirely up to you.”

Her lips twitched, as though she was about to speak, but before she could utter a word, he held up a hand to stop her. “You should know, before making a decision, that there will be sex involved. I’ll expect you to share my bed, if that’s something I require.”

Elena’s eyes widened and she barely stopped herself from reaching out to slap him. What kind of woman did he think she was?

“Aren’t there women you can hire for that sort of thing?” she snapped. “I’m not a prostitute.”

“I never said you were. I’m simply telling you what it is that I need, and what you can do to help your father save his business.”

“So you’re asking me to be your mistress. Where you want me to be, when you want me to be there . . . a living doll you can take out of its box to look pretty and satisfy your physical needs, then put back when you’re finished.”

He shrugged and stuffed his hands into the front pockets of his slacks, causing the sides of his suit jacket to bunch.

“That’s not exactly how I would have put it, but yes. I need a mistress and you need to buy time for your father to save his company. That’s the deal, take it or leave it.”

“You bastard,” she muttered with a breathless laugh that was anything but amused.

“Quite possibly,” he said. “But you’re the one who came to me. And you should consider yourself lucky I’m making you any sort of offer at all. I could have just as easily given you a firm no and sent you on your way.”

She wished she could argue, but knew he was absolutely right. Coming here had been a long shot, and the fact that he was suggesting any compromise at all was a blessing.

The question was: did she have a choice?