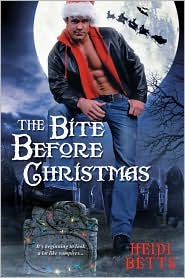 Today, we are once again celebrating the release of THE BITE BEFORE CHRISTMAS—weeeeeeeeeeee! This time, with a rockin’ Cyber Launch Party over at Author Island. :island:

I’ll be chatting, of course…answering questions, being my usual goofball self, etc….& giving away a copy of my only other paranormal release to date, HOTTER THAN HELL.  And have I mentioned that there will be more pimping of my fang-tastic Vamp Swag Bag Giveaway?  :vampire:

So it’s definitely going to be a blast & I’ll expect to see you there! :zombiekiller:

But because I hate to leave you hanging over here, I thought I would fill today’s space with a few “‘Twas the Night Before Christmas” parodies to tickle your funny fang. :vampire:

A Dieter’s Night Before Christmas

Twas the night before Christmas and all ’round my hips
Were Fannie May candies that had sneaked past my lips.
Fudge brownies were stored in the freezer with care
In hopes that my thighs would forget they were there.

While Mama in her girdle and I in chin straps
Had just settled down to sugar-borne naps.
When out in the pantry there arose such a clatter
I sprang from my bed to see what was the matter.

Away to the kitchen I flew like a flash
Tore open the icebox then threw up the sash.
The marshmallow look of the new-fallen snow
Sent thoughts of a binge to my body below.

When what to my wandering eyes should appear:
A marzipan Santa with eight chocolate reindeer!
That huge chunk of candy so luscious and slick
I knew in a second that I’d wind up sick.

The sweet-coated Santa, those sugared reindeer
I closed my eyes tightly but still I could hear;
On Pritzker, on Stillman, on weak one, on TOPS,
A Weight Watcher dropout from sugar detox.

My droll little mouth and my round little belly
They shook when I laughed like a bowl full of jelly.
I spoke not a word but went straight to my work
Ate all of the candy then turned with a jerk.

And laying a finger beside my heartburn
I gave a quick nod, toward the bedroom I turned.
I eased into bed, to the heavens I cry
If temptation’s removed I’ll get thin by and by!

And I mumbled again as I turned for the night,
“In the morning I’ll stave…’til I take that first bite!”

(This one is probably better suited for my next vampire romance—you know, the one set in Vegas—but… )

A Gambler’s Night Before Christmas

Twas the night before Christmas.
I hit the casino.
I went there to play,
More than just Keno.

The dealers were assigned to their tables with care.
Chatting with patrons who were gambling there.
I walked to the Slots and started to Play.
I had a feeling this would be my Day.

I put in my coins and gave the handle a yank.
As the coins started dropping I heard them go “Clank.”
The wheels started spinning, they whirled and they glowed.
Alas! I saw three 7’s, lined up in a row.

The lights started flashing, the bells all were ringing,
Out came the Jackpot with that old familiar jingling.
I reached down and scooped up all of my winnings.
I headed for the tables.. I couldn’t stop grinning.

A table was open so I sat for Blackjack,
Put down money for chips and purchased a stack.
The Dealer was smiling, I was having such fun.
Drew a Jack then an Ace, I had Twenty One!

Now off to Roulette but which numbers to choose?
The way things were going I just couldn’t lose.
I watched the ball spinning, it clicked and it Popped.
Right into my number, that little ball dropped.

“Thirty five to One”, the dealer pushed me my chips.
Then she said, “Thanks!” for the toke that I flipped.
Then out on the floor, I heard such a clatter.
I rushed to the Craps Table, to see what was the matter.

There was this Fat Guy so lively and quick,
I thought to myself, he looks like Saint Nick.
I watched the dice as they flew from his hand.
He made his point, ever time they’d land.

“Place the six and the eight and a dollar on YO!
“He blew on the dice before letting them go.
“To some these dice are more fun than toys.
I almost forgot, hard six for the boys!”

He handled the bones so smooth and so swift.
The timing was right, to ask for a gift.
“Oh Santa please share some of your lucky charm.”
He whispered to me, as he took my arm. “If you want to keep winning when rolling the dice,
Just listen to Santa and heed my advice.
“”I’ve learned from the Experts, Scoblete, Burton and Wong.
The secret of winning is PRACTICE hard and long.”

“You MUST use your head and this is no fable.
If your Luck starts to turn, You must leave the table”
In the Blink of an eye he was headed for the door.
I pleaded with Santa, “Please, Tell me more!”

He called back to me
as he flew out of sight.
“Every day will be Christmas
If you learn to play the game right.”

A Biker’s Night Before Christmas

Twas the night before Christmas, and all through the pad,
There was nada happenin’, now thats pretty bad.
The woodstove was hung up in that stocking routine,
In hopes that the Fat Boy would soon make the scene.

With our stomachs packed with tacos and beer,
My girl and I crashed on the couch for some cheer.
When out in the yard there arose such a racket,
I ran for the door and pulled on my jacket.

I saw a large bro’ on a ’56 Pan
Wearin’ black leathers, a cap, and boots (cool biker, man).
He hauled up the bars on that bikeful of sacks,
And that Pan hit the roof like it was running on tracks.

I couldn’t help gawking, the old guy had class.
But I had to go in — I was freezing my ass.
Down through the stovepipe he fell with a crash,
And out of the stove he came dragging his stash.

With a smile and some glee he passed out the loot,
A new jacket for her and some parts for my scoot.
He patted her fanny and shook my right hand,
Spun on his heel and up the stovepipe he ran.

From up on the roof came a great deal of thunder,
As that massive V-twin ripped the silence asunder.
With beard in the wind, he roared off in the night,
Shouting, “Have a cool Yule, and to all a good ride!”

An Intellectual Night Before Christmas

‘Twas the nocturnal segment of the diurnal period preceding the
annual Yuletide celebration, and throughout our place of residence,
kinetic activity was not in evidence among the possessors of this
potential, including that species of domestic rodent known as Mus
musculus. Hosiery was meticulously suspended from the forward edge of the wood burning caloric apparatus, pursuant to our anticipatory pleasure regarding an imminent visitation from an eccentric philanthropist among whose folkloric appellations is the honorific title of St. Nicholas.

The prepubescent siblings, comfortably ensconced in their respective
accommodations of repose, were experiencing subconscious visual
hallucinations of variegated fruit confections moving rhythmically through their cerebrums. My conjugal partner and I, attired in our nocturnal head coverings, were about to take slumberous advantage of the hibernal darkness when upon the avenaceous exterior portion of the grounds there ascended such a cacophony of dissonance that I felt compelled to arise with alacrity from my place of repose for the purpose of ascertaining the precise source thereof.

Hastening to the casement, I forthwith opened the barriers sealing
this fenestration, noting thereupon that the lunar brilliance
without, reflected as it was on the surface of a recent crystalline
precipitation, might be said to rival that of the solar meridian
itself – thus permitting my incredulous optical sensory organs to
behold a miniature airborne runnered conveyance drawn by eight
diminutive specimens of the genus Rangifer, piloted by a minuscule,
aged chauffeur so ebullient and nimble that it became instantly
apparent to me that he was indeed our anticipated caller. With his
ungulate motive power travelling at what may possibly have been more
vertiginous velocity than patriotic alar predators, he vociferated
loudly, expelled breath musically through contracted labia, and
addressed each of the octet by his or her respective cognomen – “Now
Dasher, now Dancer…” et al. – guiding them to the uppermost exterior
level of our abode, through which structure I could readily distinguish the concatenations of each of the 32 cloven pedal extremities.

As I retracted my cranium from its erstwhile location, and was performing a 180-degree pivot, our distinguished visitant achieved – with utmost celerity and via a downward leap – entry by way of the smoke passage. He was clad entirely in animal pelts soiled by the ebony residue from oxidations of carboniferous fuels which had accumulated on the walls thereof. His resemblance to a street vendor I attributed largely to the plethora of assorted playthings which he bore dorsally in a commodious cloth receptacle.

His orbs were scintillant with reflected luminosity, while his submaxillary
dermal indentations gave every evidence of engaging amiability. The
capillaries of his malar regions and nasal appurtenance were engorged with blood which suffused the subcutaneous layers, the former approximating the coloration of Albion’s floral emblem, the latter that of the Prunus avium, or sweet cherry. His amusing sub- and supralabials resembled nothing so much as a common loop knot, and their ambient hirsute facial adornment appeared like small, tabular and columnar crystals of frozen water.

Clenched firmly between his incisors was a smoking piece whose grey
fumes, forming a tenuous ellipse about his occiput, were suggestive
of a decorative seasonal circlet of holly. His visage was wider than it was high, and when he waxed audibly mirthful, his corpulent abdominal region undulated in the manner of impectinated fruit syrup in a hemispherical container. He was, in short, neither more nor less than an obese, jocund, multigenarian gnome, the optical perception of whom rendered me visibly frolicsome despite every effort to refrain from so being. By rapidly lowering and then elevating one eyelid and rotating his head slightly to one side, he indicated that trepidation on my part was groundless.

Without utterance and with dispatch, he commenced filling the
aforementioned appended hosiery with various of the aforementioned
articles of merchandise extracted from his aforementioned previously
dorsally transported cloth receptacle. Upon completion of this task,
he executed an abrupt about-face, placed a single manual digit in
lateral juxtaposition to his olfactory organ, inclined his cranium
forward in a gesture of leave-taking, and forthwith effected his
egress by renegotiating (in reverse) the smoke passage. He then
propelled himself in a short vector onto his conveyance, directed a
musical expulsion of air through his contracted oral sphincter to the
antlered quadrupeds of burden, and proceeded to soar aloft in a
movement hitherto observable chiefly among the seed-bearing portions
of a common weed. But I overheard his parting exclamation, audible
immediately prior to his vehiculation beyond the limits of
visibility: “Ecstatic Yuletide to the planetary constituency, and to
that self same assemblage, my sincerest wishes for a salubriously
beneficial and gratifyingly pleasurable period between sunset and
dawn.”

Now if I could only work up “A Vampire’s Night Before Christmas”… :vampire: