I used to be normal.  Or at least I functioned within a semi-normal state of being.  There was a schedule I followed, a general routine.

But ever since I started writing at night & by hand, my life is topsy-turvy & upside-down.

Used to be, I’d actually set my alarm & get up at 8am or so—sometimes earlier.  This is not to say that I am a morning person.  I sincerely am not.  It would always take me a while to really wake up by feeding the cats & exercising for an hour.  (Because I have to do that sort of thing while I’m still sleepy & groggy, otherwise my brain catches on & tries to talk me out of it.  Often succeeding. :runrun )  But the point is, I knew what daylight looked like.  Sometimes I even saw the majority of the sun come up.

After putting in my time on the Torture Cycle or with the weights, I’d check e-mail, update my Twitter & Facebook statuses.  (Because I know y’all wait with bated breath to find out what new bit of excitement is going on in my ever-so-glamorous life & cannot function until I tell you. :muahaha )  Sometimes I’d even work on a new blog post—like this one only, you know, interesting. :moon )

Then, even though it was much closer to lunchtime, I usually grabbed a bit of breakfast.  Or if I’d spent too long at the computer, sometimes I went straight for a heartier lunch.

And after that, with my belly full & my busy work out of the way, I’d pull out my AlphaSmart and get to work.  While it was still light out.

Okay…now turn that upside down & you’ve got my new daily routine.  These days, I’m lucky if I wake up before noon.  But is that because I’m lazing abed, doing my best impression of a diva starlet?  Oh, how I wish. :cuffs   No, it’s because I’m slowing turning into a freaking vampire.

Nowadays, I drag myself out of bed when the sun is already high in the sky & heading down.  The poor Kittehs don’t know what the hell is going on & wonder why I’ve suddenly put them on a starvation diet.  (They definitely aren’t used to not being fed every five minutes. :Huh )

Almost immediately, I head to the computer because it’s already so late, I don’t want anyone thinking I died.  Or usually, because I want to be sure to alert readers to what’s going on here at WIPs or elsewhere before you’re all shutting down your computers & heading home from work.  :oops It’s all very confusing, I admit.  And I hope you know enough to just show up over here to see what’s going on for yourselves.  Eventually, I will show up.  But in the words of every teenager in every movie who ever ran from inbred cannibals with a group of friends:  Go on without me!  Save yourselves!  Okay, maybe they didn’t actually say that.  I, for instance, would be saying, Get the hell out of my way! & tripping you to buy myself some time! :runrun   (Just sayin’.)

Then, after all of that, I still climb on the Torture Cycle, but I try not to look at the clock when I do it because it’s just too bizarre to be on there at 1pm when I used to be on by 9am.  (Yesterday, it was actually 3:30pm, which almost made me cry. :sick )

Once I finish, I grab some breakfast…except how the heck can I call it that when it’s nowhere near morning anymore?  Most of the time, I don’t even bother with toast or cereal or oatmeal the way I used to.  What’s the point?  I just go straight for lunch. 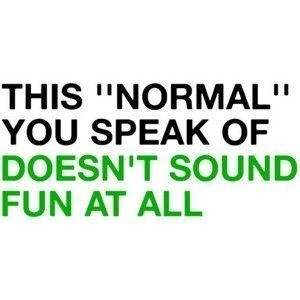 For some reason, I usually end up back at the computer after that, as well as doing a bunch of the everyday tasks I used to do as soon as I got up.

Then it’s time to get down to business, usually when it’s already very dark & everybody else is getting ready for bed.  And instead of grabbing my AlphaSmart the way I used to, I now grab a tablet & pencil, scribbling until the wee hours of the morning.  Usually until about 3am, sometimes as late as 5am.

I will be the first to admit this is totally bizarre.  It feels bizarre.  I feel as though I’ve fallen into a parallel universe where day is night, light is dark, & it’s apparently normal to be getting up just as the buses are bringing small children home from school. :drinkup

But I also have to say that it’s working for me.  I’m writing faster, having more fun, & getting more done than I have in a long time.   So what can I do?  I think I have to embrace it.  At least until this book is finished & the world turns itself right-side up again.