Time to brag about our Christmas loot before New Year’s gets here! :happynewyear

So what did Santa Claus bring you this year?  Something good or nothing but coal in your stocking because you were :naught ?

Santa didn’t bring me anything flashy this year, but I’m more than happy with the few fun things I did get. :reindeergift

For instance, I got the cutest Christmas kitty wall clock.  At first I thought it was going to meow a different holiday song each hour on the hour, but instead it just chimes the tunes.  I’m moderately disappointed about that, to be honest, but I suppose actual singing cats would have A.)  scared the real Kittehs & B.)  gotten annoying after a while.

That being said, the makers of this clock were kind of smart.  You can turn it into just a clock, no hourly tunes involved, simply by taking out the extra set of batteries.  And it only chimes during the day or if the lights are on, shutting itself off in the dark.  Nifty, huh? :winkcookie 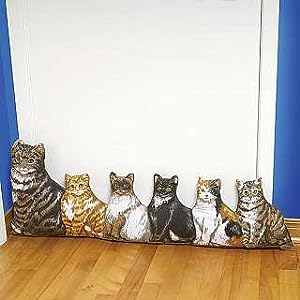 I also got a kitty cat draft dodger for my office.  Been needing one of those.  And it’s nice & sturdy, so it keeps out the cold air without falling over all the time.

One mildly amusing thing about it:  A couple of The Kittehs are not fans.  When they get close to it, wanting out on the enclosed porch through my office door, they give the big cat on the left the hairy eyeball & even sometimes skitter back a step as though they think he’s real.  Ha-ha!  (P.S.  If it really scared them, I’d get rid of it, but they’re just giving it a wide berth until they get used to it being there. :rasssp )

First, I love it because it’s a pun.  And it cracks me up every. single. time. I look at it.  But I also love it because there are years when I’m a total Scrooge about Christmas.  I wasn’t this year, but it happens, & now when it does, I’ll have the perfect mug to support my Grinchy mood.

I must admit that I also did a little Christmas shopping for myself at Thanksgiving.  Taking advantage of all those Black Friday/Cyber Monday/whatever sales, I found myself several DVDs at really good prices.

Supernatural (Season 8), Leverage (Seasons 3 & 5), The New Adventures of Old Christine (Season 1), Raising Hope (Season 1), When in Rome, & Battleship.  It sounds like a lot, but I got all of them for either $10 or $5 each; I told you, really good prices.  They’ve also been on my Wish List for a while, so I was simply catching up while the sales were in my favor.

And as usual (when I’m not in a Grinchy mood), I made sure the holidays weren’t just about me… :singingtree

As you know, to Madame Mommy Dearest I gave a shiny new empire red Kitchen Aid stand mixer.  The one she’s been wanting for ages.  Her reaction wasn’t quite what I expected that first day, but she has since tried it out, made a hugely successful batch of homemade bread, & decided she absolutely loves it.  So…delayed appreciation on that one.

But I also got her a flex edge beater, since it was the one attachment that hadn’t come with the mixer itself, as well as a couple of books, a couple of magnets, some peppermint coffee, & dark chocolate-covered pretzels.

Before Christmas, I also did mega pet food shopping & donated hundreds of dollars worth to both the local SPCA & the Hundred Cat Foundation for their Feral Cat Food drive.  I worry so much about homeless animals at this time of year.  Well, all year, of course, but around holiday time, donations & concern for them really dwindles.  Rather than spend money on high-priced gifts for myself or for others that we may or may not need, I try to always think of the animals & make sure I donate to them first.

Along those lines, this year I also sponsored my sweet little Sulcata tortoise Josie via Centre Wildlife Care.  Remember the “turtle” I discovered in my front yard last summer?  That’s Josie!  I had to turn her over to wildlife rehabilitators who knew how to care for her better than I could, but I still love her & think about her all the time.  And I keep in touch with them about how she’s doing.  So this year, when they started their “Sponsor a Critter for the Holidays” fundraiser, I couldn’t wait to sponsor my sweet little Sulcata. :smooches   (This pic isn’t Josie, by the way, but I’ve got pictures of her on my other computer.  Remind me & I’ll try to post them soon.)

And for the furry little loves of my lives (a.k.a. The Kittehs) I got a new cat tree climber.  It only has two levels, but I couldn’t resist because the posts are sisel (their favorite!) & it also has one of those U-shaped bristle brushes that they can rub their faces against.

I also gave them two scratchers they aren’t nearly as delighted with as I expected.  One is a Scratch Lounge; it’s got cardboard sides & they can sleep  in it without falling off like with the flat ones, & everything. The other is a fold-away scratch tunnel.  I thought they’d love this, since one of The Kittehs loves to hide inside tight spaces & they all love to scratch on an incline.

But so far, I’ve gotten mostly feline disinterest in both.  Le sigh.  Hopefully, though, they’ll turn out to be a Gift Grenades—the kind you toss out & are only truly appreciated after time.  That’s certainly happened with this sort of thing in the past. :candycane

But the coup de grace & the present they loved right off the bat, is this Posh Shape & Scratch scratcher.

Are my kiddos spoiled or what? :rudolph   But they’ll get plenty of enjoyment from it, & they’re totally worth it.

(FYI, did you know cats need to scratch to shed the outer layers of their claws?  Having scratchers like these all over the place is how you save your furniture & whatnot…& they really do love them!  Most of the time. :winkcookie )

So that’s a long-winded recap of Christmas in The Dungeon—how about yours?

We want to hear about all the fun you had, whether you were Nice or Naughty this year! :chimneyman