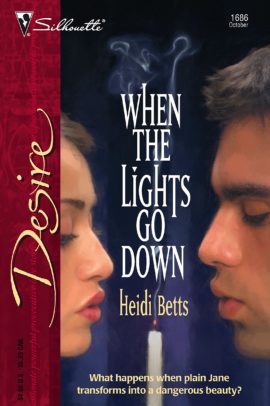 Today is Gwen Thomas’s 31st birthday.
She’s given herself T-minus 24-hours to change her life.

In the light of a new day, something had indeed changed for Gwen: She was in over her head…

"When the Lights Go Down started out smoking hot, and the pages never stopped burning! Ethan is truly too delicious for words and Gwen is a heroine who quickly steals your heart. For a short serial romance, Heidi Betts has given Gwen and Ethan a rich emotional intensity. I have fallen in love with Heidi Betts’s Silhouette Desires, and would be hard-pressed to choose a favorite, but in all honesty, When the Lights Go Down would definitely be at the top!" ~JoyfullyReviewed.com

"Heidi Betts turns in another super novel with When the Lights Go Down. It captures our interest with an incredible opening scene, and that interest is not released until the end… Ethan Banks is a major hero… The two together ignite quite a spark, giving the reader reading pleasure with sexy, passionate love scenes. I have never been disappointed in one of Ms. Betts’s novels, and this one is no exception. Awesome, first-rate job with When the Lights Go Down." ~CataRomance Reviews

"Heidi Betts proves a one-night stand can turn into so much more with When the Lights Go Down." ~Romantic Times

“You’re welcome to stay the night,” he found himself saying, though he honestly couldn’t figure out why. “I have a small guest room you can use. That is, if you still don’t feel like going home tonight.” Her lashes fluttered as she raised her gaze to his. “I’ve already inconvenienced you enough for one night. I don’t want to be a bother.”

A stab of something close to regret hit him low in the gut. A minute ago, it had sounded like she was offering herself to him, but like an idiot, he’d taken the high road and pretended to misunderstand her meaning. Now, she was getting ready to leave and he suddenly didn’t want her to.

He opened his mouth to tell her so, but she beat him to the punch.

“There is one favor I’d like to ask of you,” she said softly. So softly, he had to strain to hear. “If you wouldn’t think I was being too forward.”

He shook his head, eager to do anything that would keep her here just a little longer. “What is it?”

Averting her eyes, she drew a deep breath. The tip of her tongue darted out to caress her full, pink lips, causing blood to rush to his already half-aroused manhood. And then her request hit him, and being half aroused was no longer his problem.

“Would you please kiss me?”

Heat suffused Gwen’s cheeks at her own audacity. Had she really just asked a virtual stranger to kiss her?

She’d meant to do something uninhibited for her birthday. Uninhibited, not foolish. But the way Ethan was looking at her, she had a feeling he thought her the biggest fool in Georgetown.

She lowered her head and started to set her glass on the low coffee table in front of the sofa, wanting nothing more than to escape from this man’s apartment as fast as she could.

“I’m sorry,” she apologized, unable to meet his gaze. “I shouldn’t have said that.”

His hand darted out to grab her wrist as she began to rise.

“Wait. Don’t go. And don’t apologize,” he said, urging her back down to the couch. “You just caught me off guard there for a minute. I’ve been sitting here telling myself not to stare at your mouth or wonder what you look like naked. I was determined to be a gentleman and offer you a place to stay for the night–a place other than my bed, mind you,” he added with a wry grin. “So the last thing I expected was for you to come right out and ask me to kiss you.”

Gwen shook her head. “I’m sorry, I shouldn’t have–“

“Hey.” He took her chin between a thumb and forefinger, turning her to face him. “I told you, no apologizing. Kissing a beautiful woman isn’t exactly a hardship, you know.”

His words slid like drawn butter through her veins. No one had ever called her beautiful before, and whether she believed them or not, they made her feel beautiful.

Taking a deep breath, she licked her lips and stared into his green-flecked eyes. “So are you going to? Kiss me, I mean?”

Her stomach flipped over in anticipation, her lungs struggling for air as she watched him watching her.

Why wouldn’t he kiss her? What was he waiting for? Was she doing something wrong?

Maybe he didn’t like to kiss women who had their eyes open. She’d sort of wanted to see what was happening. He was so handsome, and this meant so much to her. But if closing her eyes would get him to put his lips on hers that much sooner, then she would do it.

Letting her lashes drift closed, she shimmied closer to him on the overstuffed sofa cushions and tipped her head back, mouth pursed in preparation. She felt his breath on her face and shivered.

His voice, at such close proximity, vibrated across her skin.

She followed his direction without conscious thought, eyes popping open to find him right there, his mouth hovering centimeters above her own. And then, before her brain could process anything more, he was kissing her.

His lips were like velvet, pressing and caressing while his tongue traced the line of her mouth before plunging inside.

Gwen had been kissed before; she’d even instigated things a time or two. But never in her life had she been kissed like this. Never before had the mere meeting of lips stopped her heart or sent heat pooling between her legs.

As gentle as Ethan was being, he still devoured her, turning her inside out with the stroke of his tongue and gentle sucking motion of his lips.

When he finally released her, she slumped back against the arm of the sofa, breathing hard.

Wow. She’d heard the old adage “be careful what you wish for, you just might get it,” but never realized it could be applied to the good as well as the bad.

Who was she kidding? That kiss hadn’t been just good, it had been phenomenal.