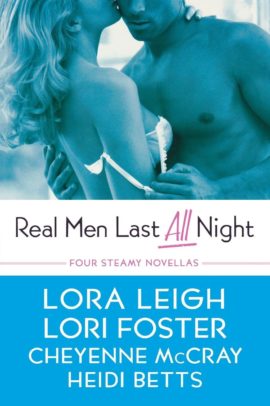 Three bestselling authors and a fresh new voice come together for one red-hot read in this sexy anthology about women who discover real men last all night...

Claire Cassidy left her high school sweetheart, Lincoln Rappaport, in search of a better life. Ten years later, she needs his help as a U.S. Marshal to find her missing daughter. Linc’s daughter. Reeling with the knowledge of a child he’s never known, Linc sets out to claim what’s his—in more ways than one.

"’Wanted: A Real Man’ is fantastic. New readers will be happy to add Ms. Betts to their automatic buy lists for sure." ~Natalie, a reader

"This is my favorite story in the whole book. I love reunion stories; I can take or leave secret baby stories. In this novella, I had both. And they worked very well together…. I loved the relationship between these two. You could just tell that no matter what happened, they were meant to be together. I loved it." ~Book Binge on “Wanted: A Real Man”

"When you bring together four top authors like Lori Foster, Lora Leigh, Cheyenne McCray & Heidi Betts how could you get anything but an outstanding book. Real Men Last All Night is a hot, sexy, delicious romance with four stories that are sure to please even the most finicky reader. Each author brings their own unique story to the book with one thing in common, sensuality!" ~Romance Junkies

"Real Men Last All Night has four steamy novellas that will make you want to keep turning the pages until the end of the book. I enjoyed each story and would recommend this book to anyone who asked me about it. Be sure to get your copy while they are available." ~A Romance Review

“These four exciting contemporaries not only prove Real Men Last All Night every night, they affirm real women do too.” ~Harriett Klausner

Standing at the edge of the grouping of desks, Claire scanned the faces of the men and women busy doing their jobs. She didn’t stumble for even a moment over any one of them.

It might have been ten years since she’d last seen him—ten long years, in which she was sure they had both grown and changed substantially—but as soon as her gaze landed on him, she knew. If her eyes hadn’t sent the message to her brain loud and clear, the thumping of her heart inside her chest would have.

For a second, she couldn’t breathe, and couldn’t move even though she very much wanted to spin and run in the other direction.

But she couldn’t afford to be a coward. Not today.

Stepping forward, she made a beeline for his desk, stopping just before she could have reached out and touched the cool metal surface. He was on the phone, turned slightly away from her, but knew she was there because he held up a hand to gesture that he’d be one more minute. She waited patiently . . . almost too patiently, considering that her gut instinct told her these few brief seconds were merely the calm before the storm.

Finishing his call, he hung up and twisted in his seat to face her.

“Yeah, what can I do for you?” he asked, speaking before he’d gotten a clear view of who was standing beside his desk.

As soon as their eyes met, as soon as he got a good look at her face, any hint of warmth in his expression vanished. His mouth thinned and he stared at her as though she was something he needed to scrape off the bottom of his shoe.

A shiver went through her. Of dread. Of regret. Of fear that his hatred for her would keep him from helping her.

But also of desire and a gut-level attraction that not even a decade apart could dispel.

He’d been a gorgeous teenager. Tall and lean, with hard muscles in all the right places. Wavy brown hair and eyes an indistinguishable color somewhere between light brown and hazel; she’d always thought of them as sort of a stormy, sexy shade of gray.

Popular, a star football player, and one of the boys who had all the girls swooning. They’d all wanted him, flirted with him, chased after him, but Claire was the one who’d landed him.

Not through any adolescent attempts at seduction, but because they’d been neighbors, grown up together, and because innocent childhood games had developed into something overtly sexual right along with their prepubescent bodies.

Memories rushed over her, sending tingles of awareness to all the right places.

As handsome as he’d been in high school, it couldn’t hold a candle to his appearance now. His rich, dark chocolate brown hair was cut almost military short. His body had gone from lean and mean to built and rippling with muscle.

If there was an inch of fat anywhere on his solid frame, she would be hard-pressed to find it. Not that she—or any other woman on the seven continents—would mind searching.

She swallowed hard, wishing the mere sight of him didn’t set firecrackers off in her bloodstream and send a sharp shock of heat directly to her womanly core.

“Linc,” she said, forcing his name past her arid throat and stiff, dry lips. There was an empty chair next to his desk and she slowly lowered herself onto its seat before her legs gave out.

“What are you doing here?” he asked in a voice that blew over her like an Arctic wind. His jaw was clenched and a muscle ticked at the back of his cheek.

There was no point in beating around the bush. Nothing that she could say would alter his opinion of her or thaw his ice-cold demeanor.

It was just as well; she didn’t have a lot of time to waste, anyway.