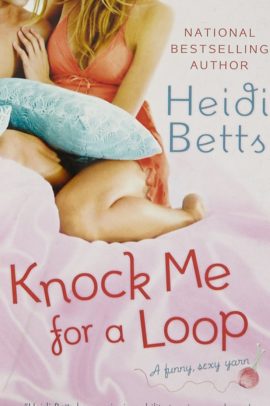 SHE’S CUTTING HIM LOOSE
When it comes to relationships, talk show host Grace Fisher won’t stand for cheating—especially not from her fiancé, star hockey goalie Zack Hoolihan. Her weekly knitting group backs her up when she calls it off, but it doesn’t entirely ease the sting of betrayal. She won’t listen to Zack’s indignant explanations of innocence—she just wants to tie up loose ends and move on. Until he winds up injured, that is, and she finds herself playing nursemaid…

NOW HE’S THROWN FOR A LOOP
Zack doesn’t know how that woman got into his hotel room, but he does know losing Grace has put him so far off his game, he ended up with a busted knee and a broken heart. If things aren’t mended fast, he’ll miss the playoffs, miss his girl, and lose everything. But if Grace is willing to push him into physical therapy, maybe he can pull her back into his arms—before their truce unravels. This time, he’ll do everything it takes to knit their relationship back together…

"Heidi Betts writes a hilarious, laugh out loud story with Knock Me for a Loop. I was cracking up throughout the story, and love the incorporation of knitting to the tale. Make sure to find a comfy couch and put your feet up, you won’t want to put this book down." ~SingleTitles.com

"Charming, creative, and completely adorable, this knitting-themed story about trust, love, and magic is too good to pass up!" ~4-stars, RT BOOKReviews

"Knock Me for a Loop is a sexy, fun, impossible-to-put-down story that had me laughing into the wee hours of the morning... Ms. Betts has written a wonderfully witty tale with a sensuous thread that will easily pull you in and leave you reluctant to come back to reality. 5 Angels!" ~Fallen Angel Reviews

"Readers can look forward to plenty of humor-filled minutes as they curl up with this great book and read from beginning to end. Heidi Betts has a way of writing highly sensual, greatly amusing stories that lure you into the story and keep you prisoner until the story is finished. Knock Me for a Loop is a wonderful example of this skill. Her slogan for the series “a funny, sexy yarn” fits perfectly---Knock Me for a Loop is a laugh riot with some megawatt sensuality between former lovers Grace and Zack." ~CK2S Kwips and Kritiques

"Heidi Betts has once again created two wonderful, endearing characters in Knock Me for a Loop... Even if you're not into hockey, this is a story that you'll have fun reading and won't want to put down. Grab yourself a copy of Knock Me for a Loop today." ~Romance Reviews Today

Pushing away from the bathroom counter, Zack ran his fingers through his still-damp hair. He’d be back in Cleveland by the end of next week. He could survive that long moving from hotel to hotel, putting on the rough-and-tumble playboy act for fans, and playing his heart out on the ice.

But when he did get home, he was heading straight to Grace’s apartment, and he didn’t intend to let her out of bed for a week.

He was just reaching for the knob when a knock sounded on the outside door. Couldn’t be room service, he thought, since he hadn’t called in an order yet. Maybe it was someone from hotel maintenance to work on the faulty heating and air system he’d reported earlier. Or better yet, Dylan, which would save him having to call his buddy’s room about getting together for dinner.

Since he didn’t think a maintenance guy or even Dylan would appreciate a half-naked greeting, he yanked open the bathroom door with the intention of grabbing a pair of jeans and a t-shirt before answering. Lord knew there were enough discarded clothes scattered around the floor to dress a third world country. Grace got on his case all the time about his abysmal housekeeping skills. But then, that’s why he’d hired a housekeeper.

On the way out of the bathroom, he stubbed his toe on the heavy metal door and cracked his shoulder into the jamb. Muttering a low oath and cursing miniscule hotel rooms that weren’t designed to accommodate professional athletes who topped six feet and pushed the scales at two hundred fifty pounds–most of it muscle–he changed his mind about scrounging around for something to wear and went straight to the hallway door instead, where whoever was on the other side continued to rap.

Bad mood etched clearly on his face, he yanked the door open . . . and froze when he found Grace staring up at him. He blinked in surprise, wondering if his earlier fantasy about having her on the road with him had conjured her out of thin air. Or maybe he’d slipped on the slick tile of the bathroom floor, cracked his skull on the edge of the tub, and was hallucinating.

Nice hallucination, though. She looked amazing, her hair a mass of sexy curls and her lips a glossy rose bow on her heart-shaped face.

“Hey,” he said, running his fingers through his wet hair as he tried to absorb the fact that she was actually standing in front of him. “What are you doing here?”

“What do you think I’m doing here?” she replied saucily. Her grin widened as she stepped into the room and pressed herself against his tall frame. “I came to rock your world, big boy.”

At that declaration, his lips curled and the fog cleared from his brain. He didn’t know how she’d gotten here or why she’d decided to drop in on him, but at the moment, he didn’t particularly care.

“Well, okay, then,” he said, wrapping an arm around her waist. “Come on in. Don’t mind the mess.” Shifting them both out of the way, he let the door swing closed.

“I never do,” she shot back with a chuckle.

Pulling away slightly, she leaned back against the wall running between the bathroom and the rest of the suite. She raked him from head to toe with a hot gaze, using two manicured nails to tug at the towel he was still holding low on his hips.

“I think I’m overdressed,” she murmured, a wicked glimmer shining in her ice blue eyes.

As far as he was concerned, if she was wearing anything more than him and a smile, she was overdressed.

“I should say so.” He let his gaze wander over her curvaceous figure and felt his temperature spike. “You need any help remedying that fact?”

Slipping away from the wall, she continued to face him as she walked backwards into the main area of the room. Step by slow step, while her fingers worked to free the buttons running down the front of her blouse.

Her heel caught on something and she stumbled. They both glanced down to find her standing in the leg hole of a pair of discarded BVDs.

“Nice,” she said, shaking her foot and kicking the briefs aside.

Zack expected her to return to her little striptease. Was salivating for it, actually. The small terrycloth towel at his waist didn’t act as much of a cover to begin with, but with the front taking on a tell-tale tenting with his growing hard-on, he might as well have been naked.

Instead, Grace slowly turned her head to the side, focusing on the king size bed. He had no doubt that’s where they’d end up, but he was in no rush. He was fine with watching her undress, then maybe taking her up against the dresser, on top of the round table in the corner, in the chair currently tucked under the small desk . . .

When Grace returned her attention to him, her eyes no longer glittered with smoldering desire. Her mouth was no longer tipped up seductively at the corners. In fact, she looked down-right angry.

“Is there something you’d like to tell me?” she asked, her previously sultry tone replaced with icicles sharp enough to maim.

Zack was used to his fiancée’s rapid-fire changes in mood. Women in general were mercurial, he’d found, able to go from laughing to yelling to crying in two seconds flat. And Grace, he knew, could be more emotional than most.

Having her launch into an hour-long tirade because of some injustice she read about in the newspaper or tear up over a Hallmark commercial had taken some getting used to. His favorite, though, was when she started laughing over the silliest things, like a joke she heard at the studio or a remembered scene from a movie she’d seen months before.

He’d never known her to go from hot-for-his-bod to rip-his-face-off in the blink of an eye, though. And damned if he knew what he’d done to piss her off.

She cocked her head to the right, and he followed her gaze. Shock like a blast of cold air hit him full in the chest and had his heart plummeting to his gut.

The blonde in his bed climbed to her knees and let the sheet drop, revealing a skimpy pink bra and panty set.

“Hi,” she chirped with a too-sweet smile. “I didn’t want to interrupt.”

Zack couldn’t have been more surprised if a band of rodeo clowns had jumped up and started dancing around the room.

“What the hell are you doing here?” he snapped.

“You know, I was just asking myself the same question.”

Unfortunately, this response came from Grace, not the puck bunny who’d somehow sneaked into his room while he was in the shower.

Fingers flying, Grace rebuttoned her blouse, then charged for the door, pushing past a still-stunned Zack before he had a chance to stop her.

This was unbelievable. How the hell had this woman gotten in? And how the hell could Grace believe he’d invited her?

Hand on the knob, not bothering to turn around, she shot back, “Fuck you. Or better yet, let your bimbo do it.”

Heedless of his near-naked state, Zack caught the door before it closed and raced after her. The towel flapped around his legs as his bare feet pounded down the carpeted hallway. She was already several yards ahead of him, ignoring his repeated calls for her to stop, to listen.

“Shit,” he muttered as she slammed through the stairwell door.

Tucking his chin into his chest, he put on an extra burst of speed, determined to catch her . . . then came to a screeching halt as the elevator to his right whispered open and an elderly couple stepped out. The woman’s eyes went round as golf balls and she gasped, turning seven shades of red.

Glancing down, Zack’s own face flared with heat as he realized he’d lost his towel and was now standing bare-ass naked in the middle of a Marriott hallway, scaring the bejeezus out of two people who looked old enough to be his grandparents.

In his estimation, he had three choices: keep after Grace in the buff and risk blowing out pacemakers or shocking mothers and small children–not to mention having his picture wind up on the front page of every tabloid in the country; go back for his towel, then take off after Grace again, pretty much risking the same three results–albeit on a slightly smaller scale; or return to his room, put on some clothes, and hope Grace hadn’t disappeared from the hotel completely before he could catch up with her.