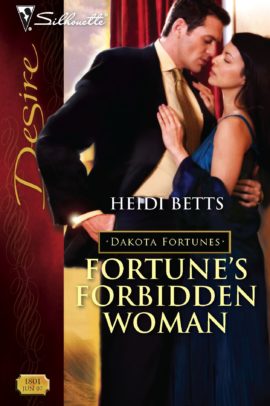 
A Romantic Times nominee for Best Silhouette Desire of 2007!

Creed Fortune had hungered for Maya Blackstone for nearly a decade, but he’d held back to protect his family’s reputation. After all, the press would have a field day if they uncovered a clandestine affair between a Fortune heir and his very own stepsister! Then a heated argument between Creed and Maya turned into a feverish night of lovemaking. Even though the raven-haired school teacher melted his heart in ways he’d never dreamed possible, Creed had to find a way to douse their dangerous attraction. Otherwise, the sordid truth could topple the Fortune empire!

DAKOTA FORTUNES: Power is their birthright, oil is in their blood.

"Fortune's Forbidden Woman concludes [the 'Dakota Fortunes'] series with an ending that was fantastic and guaranteed to leave a smile on your face. Heidi Betts demonstrates how families are made up of many individuals trying to come together as a unit. Strife is unavoidable but watching its resolution is so much fun. Fortune's Forbidden Woman lives up to the standards of excellence set for this series. Kudos to Heidi Betts on another well written story.” ~CataRomance Reviews

“Well paced and steamy…perfect for a fun and quick read.” ~Romance Reviews Today

It was almost midnight, and the windows were dark, but Creed Fortune couldn’t have cared less. He stomped up the steps to Maya’s townhouse and pounded on the door with the side of his fist.

Where did she get off telling him he’d ruined her for ever going to bed with a man?

She sure hadn’t had any trouble attracting the opposite sex in high school, not once she’d begun to fill out with those soft, feminine curves and grown into her striking half-Yankton Sioux features. The long, black hair, chocolate brown doe eyes, and ripe little body had had boys panting after her like a mare in heat.

He pounded again, louder and longer this time. Across the street, a dog barked, and inside, he thought he heard movement. A second later, a light flicked on and the door swung open.

He took a moment to hope she’d checked the peephole first, then rational thought spun away as he took in her tousled hair, drowsy eyes, and the short, faded nightshirt that seemed to cling in all the right places.

With a tired sigh, she leaned against the edge of the door and let her lashes flutter to half-mast. “Now what do you want, Creed? In case you hadn’t noticed, it’s the middle of the night and some people are trying to sleep.”

“At least we know you’re sleeping alone, don’t we?”

A spark flashed in her narrowed eyes. “Go to hell,” she said and made a move to slam the door in his face.

He stuck out his booted foot, blocking the motion. It didn’t keep her from pressing forward, throwing her body against the heavy wood.

“Get your foot out of the door, Creed. Go bother someone else and let me go back to bed.”

He added his knee and upper body to the battle, causing her to grunt as he pushed her back and forced his way into the house. Kicking the door closed behind him, he leaned against it and crossed his arms over his chest. Maya did the same, retreating several steps until she’d put what he was sure she felt was a safe distance between them.

“Adding forced entry to your resume these days?” she asked belligerently.

He shrugged, keeping his face stonily blank even as heat started to pump through his blood and pool near the region of his groin. Dammit, why did she have to be so beautiful?

She was his step-sister, for God’s sake. Not related by blood in any way, but related through the marriage of his father to her mother.

No matter how you cut it, she was forbidden fruit, and he had no business lusting after her. No business at all.

Never mind that he’d secretly been doing just that since she’d hit puberty. He was ten years too old for her, and supposed to play the part of big brother, but still he’d wanted her.

Why did she have to grow up and out in so many interesting places? Why couldn’t she have remained a plain and gawky child forever?

Tamping down on his errant thoughts, he kicked away from the door and stalked toward her. “If I have to,” he said in answer to her question.

“What are you doing, Creed?” She continued her backwards shuffle, occasionally bumping into the wall or glancing behind her to make sure the path was clear. “Why are you here?”

“Do I need a reason?” he asked, never breaking eye contact.

“Yes. You do. Have you found out something about my mother? If so, tell me and then get out. Otherwise, just get out.”

They both stopped moving. One corner of his mouth lifted in a humorless half-grin. Since when had she become so good at telling him off and ordering him around? It certainly was a change from the quiet, meek girl she’d been when they were kids.

“No, nothing about your mother. The private investigators are still working on it. I’m here because of what you said on the phone.”

Her expression flickered, the hard, angry glint in her eyes being replaced by wary uncertainty. He even thought he saw a touch of pink color her high cheekbones.

“I ruined you for other men?” he pressed. “Just what the hell is that supposed to mean?”

She flinched. A small, almost imperceptible motion, and the only sign that she was uncomfortable with the topic of conversation. But he caught it, and some part of him reveled in his ability to shake her.

“Nothing.” Her voice was low and she gave one quick, jerky shake of her head. “It doesn’t mean anything. I was tired and worried about my mom. I didn’t know what I was saying.”

Valiant effort, but he didn’t buy it.

He took another menacing step forward. “Guess that means Brad isn’t getting any, huh? Nearly a year of sniffing around your skirts, and he gets nothing for his trouble. Poor, pathetic bastard.”

Her chin went up at that, her shoulders squaring as she straightened her spine. “Look who’s talking. I may not be sleeping with Brad, he may not be ‘getting any,’ but at least he’s a gentleman. He would never barge into my house and corner me like this. He would never accuse me of being a tramp, or make me feel like one the way you did just because a boy sweet-talked me into his car when I was seventeen and then attacked me.”

It was his turn to flinch, but only on the inside. He remembered that night as though it were yesterday. Stumbling upon Maya and her current boyfriend—or at least one of the boys she’d been hanging out with quite a bit that summer, ever since the opposite sex had begun to take notice of her fine feminine form… Taking notice of the tell-tale rocking of the shiny Trans Am and the noises that were emanating from inside… And then realizing Maya’s cries weren’t of the pleasurable variety.

He remembered the fury he’d felt as he’d opened the driver’s side door and yanked the boy out by the scruff of his neck. The kid—some varsity football jock with a letterman jacket—had been lucky to get away with only a few scrapes and bruises, because Creed had sincerely considered killing the little bastard.

As it was, he’d given the jerk a beating he wouldn’t soon forget. Then he’d dragged Maya home, filling her ears with lectures and invectives the whole way.

“That’s why you won’t sleep with Brad McKenzie?” He made a scoffing sound, his mouth twisting into a wry smirk. “He must not be very persuasive. I could have you begging for it in two seconds flat.”

Any intimidation or discomfort Maya might have been feeling flew out the window at his cocky remark. Her brown eyes glittered dangerously and every muscle in her body went rigid. She’d been backed up until her calves hit the edge of the sofa, but now she took a single, confident step forward.

“Oh, really. And just how would you manage that? Twist my arm until I told you what you wanted to hear, whether it was true or not?”

Her words were like gasoline thrown on an already raging brush fire. The low-level desire humming through his system suddenly ratcheted up several notches to full, mind-numbing throttle.

He reached out, grabbing her wrist and tugging her against his chest.

And then he took her mouth with his.