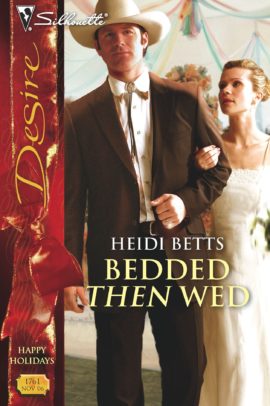 WHAT’S THE BRIDE WORTH?

Wealthy rancher Mitch Ramsey had never given much of a second look to his neighbor Emma Davis until an unexpected encounter led to a night of unbridled passion. Mitch figured their affair could be a discreet diversion, one they had both gone into with eyes wide open.

Then Emma’s father made him an offer he couldn’t refuse. Marry Emma and Mitch would inherit what he had always coveted—the entire Davis ranch. But Emma was never to know….

“You can not go wrong with Heidi Betts! Bedded Then Wed is richly emotional and stirred my heart. I found myself quickly invested in Emma and Mitch’s relationship and hanging on every page waiting for them to find their happy ending. Heidi Betts can not write quickly enough for me and each book is a treat that I can’t wait to dive into.” ~Joyfully Reviewed

“Both Mitch and Emma have real emotions that make them likeable characters. Their story smolders from page one, and readers will want to root for them to live happily ever after. For readers looking for a story that is passionate and compelling, pick up Bedded Then Wed today.” ~Romance Reviews Today

“Emma and Mitch are so realistically portrayed that you can’t help but smile with them and cry with them. The tale itself is so romantic that the end will leave your heart pounding. Bedded Then Wed is another book to buy on your next trip to the bookstore. Heidi Betts never disappoints!” ~CataRomance Reviews

“So where are we going?” she asked once he was behind the wheel and they were headed down the long dirt driveway to the main road.

She raised a brow at his less than enlightening answer, but he kept his eyes on the road and couldn’t see the look of consternation she shot him.

Ten minutes later, they pulled into the parking lot of the Silver Spur, one of the most popular honky-tonks in Gabriel’s Crossing. Lights blinked on the roof and bright neon signs shone in the windows advertising a dozen different brands of draft and bottled beer.

Emma had only been to the Spur a couple of times before, and always with a group of friends because the bar tended to get rowdy on the weekends. But this was a weeknight, and even though it was a strange place to go for a first date, she was with Mitch, so she had nothing to worry about.

He came around to help her down from the truck, then held her hand as they walked into the bar. Loud country music blared, filling the early evening air and hitting them like an ocean wave when they pushed open the front door.

Men and women, most wearing cowboy hats of all sizes and colors, filled the wide open room. Dancing, milling around, sitting at the tables and bar with longneck bottles of beer and bowls of peanuts in front of them.

Sawdust was scattered in clumps across the scarred wood floor and antlers decorated the walls, along with a dart board and assorted alcoholic beverage posters and signs. At the far end of the room, a live band played on a raised stage and a group of people–mostly made up of couples–line danced to the tune of a Texas two-step.

“So what do you want to do first?” Mitch asked, leaning over her shoulder and speaking close to her ear to be heard over the volume of the music. “Dance, find a table and order some nachos, or sit at the bar and order a drink?”

She scanned the crowd, weighing her options. This was a far cry from the movie or dinner at a quiet restaurant she’d expected of tonight, but it could still be fun.

“Let’s get a drink,” she yelled back, tipping her head toward the bar.

With his hand at her back, Emma eased her way through the crush of bodies and hopped up on one of the tall stools lining the long mahogany bar. Mitch took a seat beside her and ordered two cold beers.

Since she hadn’t had anything to eat yet that evening, she sipped her drink slowly and tried to avoid their images in the mirror that lined the wall behind the bar.

It wasn’t her reflection that made her uncomfortable, but Mitch’s. He was too darn handsome, too tall and sinewy and masculine in all the right places.

Beneath the wide rim of his black hat, he looked like some hardened Clint Eastwood character. His eyes glittered in the low lighting, his mouth a thin line of indifference.

And yet he took her breath away. Every strong, familiar inch of him.

She dragged her gaze away, staring intently at the colorful label that circled the brown glass bottle in her hand until her pulse slowed to an almost human rate of speed instead of that of a hummingbird.

Even in a rowdy, crowded bar, surrounded by strangers and the teeth-rattling thrum of a noisy band, she was still unaccountably attracted to him. He hadn’t touched her intimately since that night in the barn two weeks ago, yet she still felt the whisper of his hands and mouth on her naked flesh.

She shivered at the memory and took a long swallow of her light beer to extinguish the fire sparking to life low in her belly.

When Mitch’s hand closed on her arm, she jumped.

“Sorry, didn’t mean to startle you.”

He was talking at a near-normal volume now, and she realized the band had slipped into a much slower song.

“Let’s dance,” he said. Then, without waiting for a reply, he slid off his stool and pulled her down to the floor beside him.

Fingers linked together, he led her to the dance floor, then swung her around and into his arms.

He held her entirely too close . . . not too close for society’s standards, especially in this place, but too close for her peace of mind. For her body to maintain its natural calm.

One of his hands clutched hers. The other rested at the small of her back, his arm wrapped around her waist. His tall form brushed against her in all the right spots–chest to breasts, stomach to stomach, pelvis to pelvis. Everywhere they touched, rockets went off beneath her skin.

If he hadn’t been holding her up, she thought she probably would have melted to the floor. As it was, her feet felt like they were barely touching the ground.

The music flowed all around them, and for the moment she let herself pretend this was more than their first date, more than two old friends who were toying with the idea of getting more seriously involved.

She imagined they were old lovers, maybe even a married couple, still very much in love. Out on the town for their anniversary, or perhaps just for an evening away from the kids.

The hand on her back shifted slightly lower, caressing the upper curve of her buttock and drawing her snug against his arousal.

It stunned her still that he was so obviously attracted to her. After all the years she’d pined for him from afar, to suddenly have him notice her as a woman and sexual interest left her feeling confused and off-balance. Especially when he could make love to her with abandon one minute, then leave her hanging for two full weeks without so much as a phone call.

But he was trying. His suggestion that they try dating might not have been the smoothest invitation she’d ever received, and this might not be the greatest first date she ever gone on, but she gave him an A for effort.

And an A-plus for the way he made her heart beat faster, her knees turn to jelly, and her insides feel like she was riding up and own in an elevator car.

She sighed and closed her eyes, forgetting that they were in the middle of a crowded dance floor. As far as she was concerned,there was only Mitch and herself and the electricity arcing between them.

She blinked, raising her head to meet his gaze. His gray eyes burned with barely banked desire, and it was all she could do to remain upright.

She didn’t think, didn’t weigh the pros and cons, she simply responded in the only way her heart and body would allow. “Yes.”