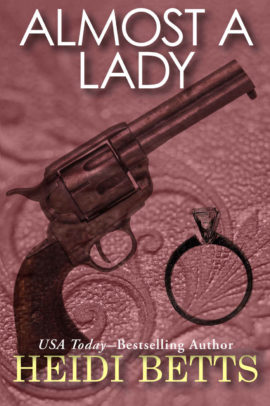 Pistol-packing Pinkerton agent Willow Hastings always got her man. Until handsome, arrogant railroad security chief Brandt Donovan “gallantly” interfered in an arrest, costing Willow a collar and jeopardizing her job. And now she was supposed to collaborate with the dashing, distracting bachelor to catch a killer? Never! Brandt might be six plus feet of muscular, mouthwatering masculinity...

But He Was No Gentleman

Brandt was shocked yet intrigued by this curvy, contrary weapon-wielding brunette he found posing as a singe in a cowtown bordello. Willow’s sultry voice, silken skin, and subtle scent of roses made him ache to savor her between the sheets. But go undercover with the perplexing Pinkerton? Chastely pose as man and wife to entrap a killer? Such unthinkable celibacy could drive a bachelor to madness. Or to — shudder — matrimony

“Heidi Betts’s Almost a Lady is a terrific conclusion to her Rose Trilogy for Leisure! In this action-packed winning western, a feisty Pinkerton agent proves she can hold her own with an arrogant railroad security chief in business as well as the bedroom as they seek to catch a killer. Almost a Lady will make Heidi Betts an instant reader favorite with western historical fans!” ~Patricia Rouse, Romantic Times columnist

“Oh, this one is just too excellent for words! Just reading the back of the book had me wanting to tear into it! It started out dangerous and was seductive enough to hold until the killer was found. I never knew I could read that fast! I had to see what happened next! An exciting read that will most certainly hit the best seller lists!” ~Huntress Book Reviews

“I knew from the first page that I was going to enjoy this novel, and my inability to put it down confirmed this. The explosive interaction between Willow and Brandt singes the pages as it changes from antagonism to fiery passion, and the intrigue and danger keeps the book aflame. Congratulations, Ms. Betts, on a superb, well-written, romantic historical trilogy filled with passion, spirited and determined women, sexy, endearing heroes, and always an exciting plot.” ~Rendezvous

“I’d hate to waste a bullet killing an innocent man,” she said, changing the direction of her aim.He stared down the barrel of the revolver. “I’d hate to die,” he replied smoothly.

“Then just turn around and walk away.”

“Sammy!” She aimed for his thigh, wanting to hobble him, not kill him.

But before she could get off a shot, the stranger barreled into her, knocking her to her back on the hard ground. The air rushed out of her lungs as the revolver spun across the ground, out of reach.

She kicked, but the man pinned her legs. She tried to wriggle away, but strong hands pressed into her shoulders, keeping her flat.

Her struggles ceased. She forced herself to relax, let her muscles go slack.

She watched him carefully, waiting for his guard to drop.

He sat up on his haunches, straddling her hips. “Christ, for such a scrawny fellow, you sure can hold your own,” he said, wiping the palms of his hands on his thighs as he got to his feet. “We both know the odds are against you, mister. Get up.” He extended an arm in her direction.

She watched him carefully. “You taking me to jail?” she asked.

“You did try to rob that man,” was his only answer.

Letting out a breath, she lowered her eyes in defeat. With great reluctance, she put her hand in his. He gave a tug and pulled her to her feet.

“Let’s go,” he said, beginning to turn as though he expected her to follow.

Lightning-quick, she struck out with the heel of her hand, catching him on the side of the face, just below the eye. He gave a yelp of pain. She knocked him off balance and against the nearest building, in the same motion drawing the pearl-handled stiletto from inside her boot.

Her fingers curled around the collar of his shirt. “For such a big man, you sure don’t have much brains,” she said.

Brandt’s eyes narrowed. There was something not quite right about this whole scenario. How had a man of such small stature gotten the drop on him — all six feet three inches of him? And why would this fellow be robbing a man with clothes more tattered than his own?

He looked more closely at his captor’s face. Even in the muted evening light he took in long, thick lashes, high cheekbones, and smooth skin without a hint of beard stubble. And bright eyes the color of … amethyst.

His own eyes widened. This was no man he was dealing with. This was most definitely a woman.

“Shut up. Unless you want to explain a new medical condition to your wife.”

For a minute he didn’t know what she meant. Then he felt the cool steel of a knife at his groin.